Look at their tiny glasses!

Many vertebrate animals, including us humans, have two eyes that are able to perceive three-dimensional structures.

But a new study has discovered that praying mantises have an altogether unique ability to see in 3D.

This so-called 3D vision – also known as stereopsis – is how creatures with binocular vision produce depth perception when they’re taking in the world.

Each of our two eyes sees the world from a slightly different perspective – these are then overlaid into one image in our brains, the slight differences between the two images allowing for an instantaneous calculation of distance (hence, depth perception).

But praying mantises, with their tiny bug brains and huge bulging eyes, are a special case.

Not only are they the only insects that have stereopsis, they’re actually the only invertebrates with this ability – and studying how their eyes work could help develop more effective robot eyes.

If you want to learn about how praying mantises see the world, one thing you can do is stick teeny tiny 3D glasses on their faces, and this is what researchers at the University of Newcastle in the UK have been doing for some years. 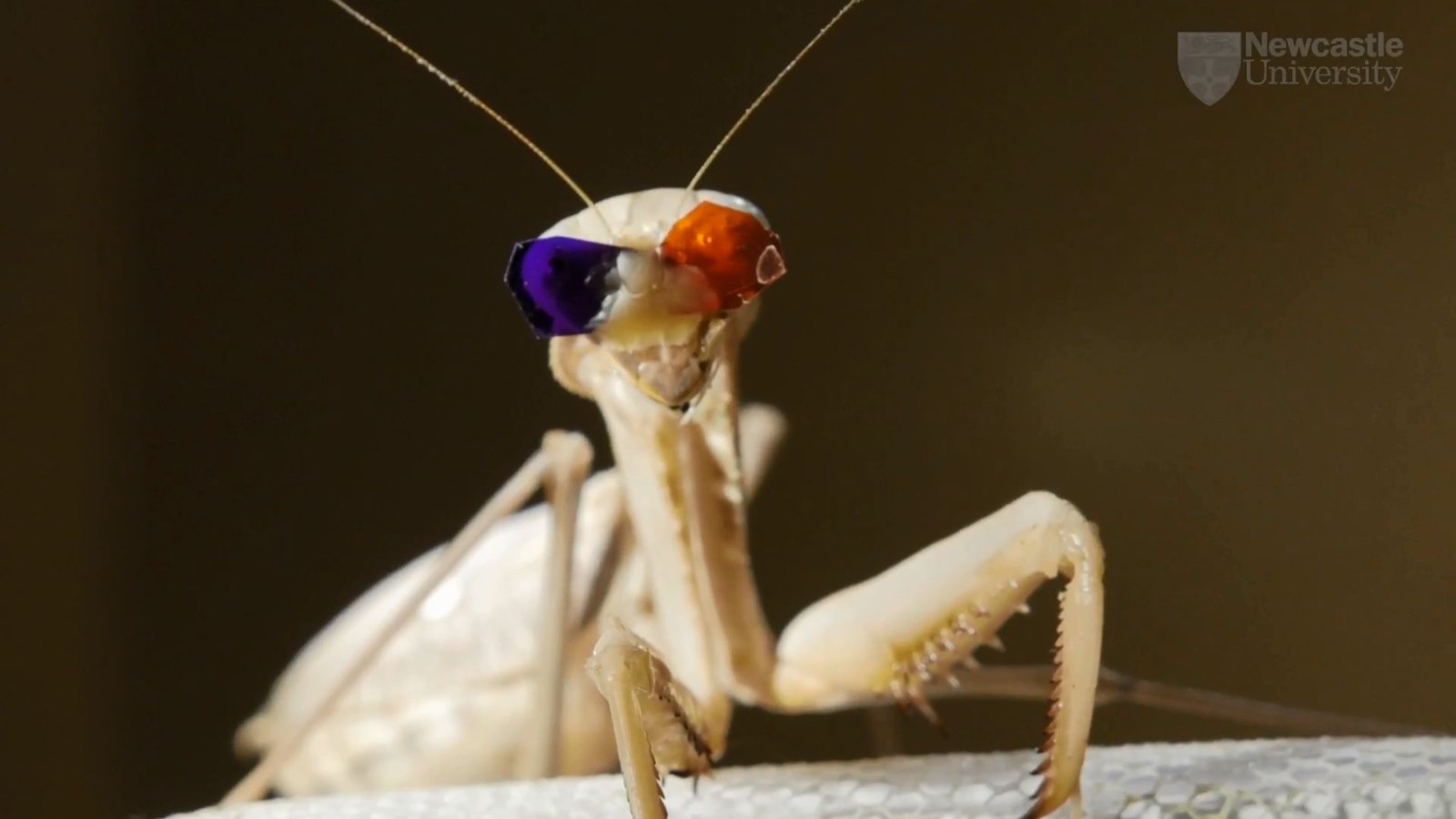 To test depth perception in praying mantises, lead author and behavioural ecologist Vivek Nityananda and his team showed the insects movies with illusory fields of depth, using a simplified version of the technology that lets us watch 3D movies at the cinema.

The praying mantises’ little glasses were gently affixed to their heads with a harmless and removable piece of beeswax.

The team used two types of movie – the first type was a clip of delicious moving insect prey hovering right in front of the mantis. The mantis could not only see the prey, it also tried to catch it.

The second type was the same type of movie used to test depth perception in humans. Each side shows a static pattern of random dots, and a patch of dots moves outwards in a spiral.

In each individual frame, this target was indistinguishable from the background pattern – only by watching both would the movement emerge over time.

To understand the results, you need to understand that humans are very good at depth perception in still scenes, even when nothing is moving.

Mantises, on the other hand, don’t need to use stereopsis on static things, since they only attack moving prey.

This means that their depth perception only focuses on things that are changing, and it works brilliantly. The mantises were able to see changes in the movies that human eyes were incapable of picking out.

“This is a completely new form of 3D vision as it is based on change over time instead of static images,” Nityananda said.

“In mantises it is probably designed to answer the question ‘is there prey at the right distance for me to catch?”

Because insects have such tiny brains, this information could help figure out how to develop computer vision that requires relatively little computing power, the researchers said.

The research has been published in the journal Current Biology.