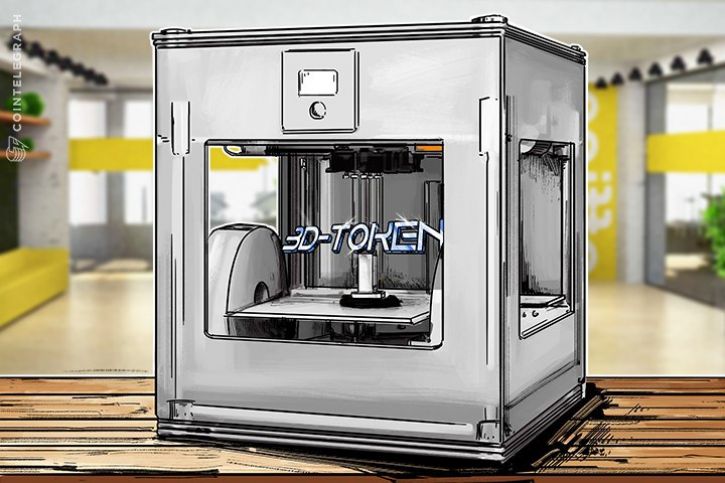 Note: interesting idea – but based on Ethereum, i.e. not Blockchain

It might have started simple, printing small objects, but in the last couple of years, 3D printing technology has really outgrown itself. Now, it is both possible to 3D print tiny structures using living cells or print a whole house in 24 hours. The idea behind 3D manufacturing isn’t new, but 3D-TOKEN, a project of the Italian Politronica Srl startup wants to integrate it with Blockchain technology to create a ‘one of a kind’ glocal decentralized Just-In-Time Factory 4.0 matching the digital revolution of the 21st century.

With steady growth, more than 278,000 desktops (under $5,000) 3D printers were available worldwide in 2015, according to the Wohlers Report 2016. The upcoming years will make these printers more and more affordable pointing towards a possible increase in demand. This is where the 3D-TOKENS project wants to tap in to create a Blockchain managed network hub of thousands of 3D-printers. The spin-off of the Italian University “Politecnico di Torino,” Politronica Srl wants to bring small to medium scale just-in-time digital manufacturing via the 3D-TOKENS project to a whole new level.

Dubbed ‘Network Robots’ Workforce,’ this network will be able to change the traditional industry norms on time-to-market and product cost. Their Blockchain-based online platform will function as a facilitator between different innovative 3D manufacturing projects and could greatly reduce production cost. At the moment, the company maintains a network of 100 3D printers. Through the 3D-TOKENS project, they aim to increase this number to 3,000 by the end of 2019 with 1,000 Network Members and a production capacity of up to 300 tons of processed bioplastics.

As of now, Politronica Srl has managed to stick a deal through its current network with such industry giants as the design shop chain Flying-Tiger Copenhagen (600 shops globally). Through this collaboration, they will roll out an innovative desktop 3D printing learning device and lamp called Q3D during the upcoming months.

The 3D-TOKENS, hence the name, will also introduce its native cryptocurrency called 3DT based on the Ethereum Blockchain (their ICO ends on Feb. 11th). Users will be able to join crowdfunding campaigns, spend coins at their internal marketplace (like purchasing digital models for their own projects) or even trade 3DTs within the network at a fixed price revealed at the end of the ICO. And those holding into their 3DTs will also be able to receive profits’ share from the Network directly.

However, people from the US and China won’t be able to purchase any coins due to various regulation, and even citizens or residents from Singapore, Hong Kong and Canada should check if they’re eligible before buying the non-refundable tokens.

Printing out the future

There is a growing interest incorporating the Blockchain technology into the 3D manufacturing world. It’s gradually being accepted, even the US Navy has considered making use of the secure data transfer Blockchain could provide to their 3D printing process. Various stages of the 3D printing process itself can benefit from the decentralized peculiarities of Blockchain distributing such tasks as the slicing stage among different users to ease on their computer’s capacity.

If realized, the 3D-TOKEN network could accelerate the 3D printing market to its full potential. The company will start the expanding of the network in Northern Italy then to Europe and hopefully to a global level in the future.

Until the ETH is back to $1,350, Politronica Srl offers a 50 percent bonus instead of 25 percent for every token purchase.