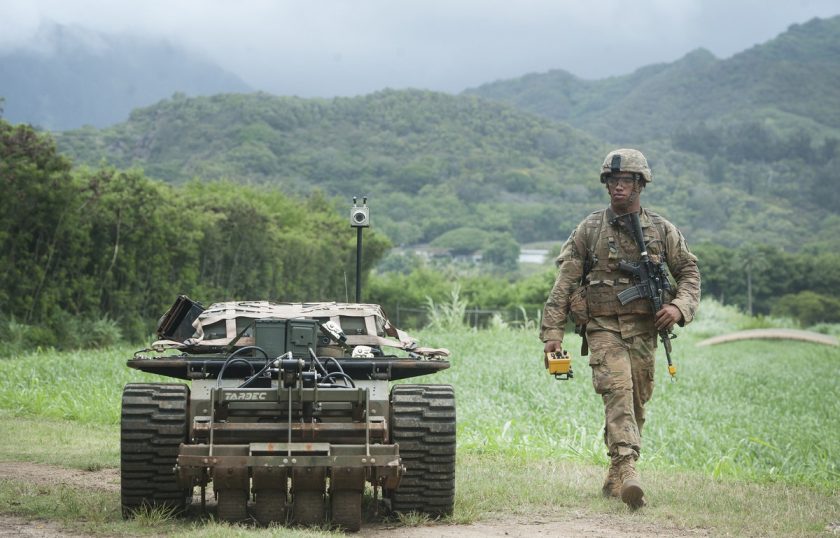 Robot soldiers from cinematic nightmares are glistening silver automatons, with rictus skulls or towering automaton bodies. Robot soldiers in real life? Not so much. They look very much like the rough assemblage of improvised weaponry that they are: a camera and a gun on a wheeled or tracked body. And rather than the exclusive domain of just a few wealthy states, these improvised robots are put together by irregular and low-budget forces, and fighting on active fronts.

Robots have seen action in Ukraine since at least 2016. Here’s a description of one such use in May 2017, from the Minsk Monitor:

The Ukrainian soldiers were using an interface sent from the robot to a computer, with an interface that showed multiple camera perspectives. The robot was operated through a set of controls, with the operator manning the vehicle similar to how an operator would drive an unmanned aerial vehicle (UAV). After lining up the target with help from a nearby soldier with a sniper rifle scope and binoculars, the operator activated the robot’s machine gun (a 12.7mm “Utyos”) and fired at the target.

As the Minsk Monitor notes, this kind of robot is in the style of the “teletank” rudimentary combat machines from the 1930s and 1940s. Remote control itself is nothing new. What does stand out is the full utility of a remote control machine, complete with cameras sending video straight to remote operators, the ability to direct such a machine from laptops and tablets, and then the iterative improvement on such devices.

Extremely simple versions of such robots showed up early in the war in Syria and various degrees of advanced robots have shown up on tradeshow floors, propaganda videos, or actual battlefields. For now, these technologies will remain interesting sideshows and test cases, as various warring parties learn what makes a useful robot, what doesn’t, and how vulnerable the lines of communication are between pilot and piloted machine.

The future of battlefield robotics may take on vastly different tactical forms, but the present of such robots is here, is happening as we speak, and should inform commanders and planners as they plot out combat over the next years and decades.