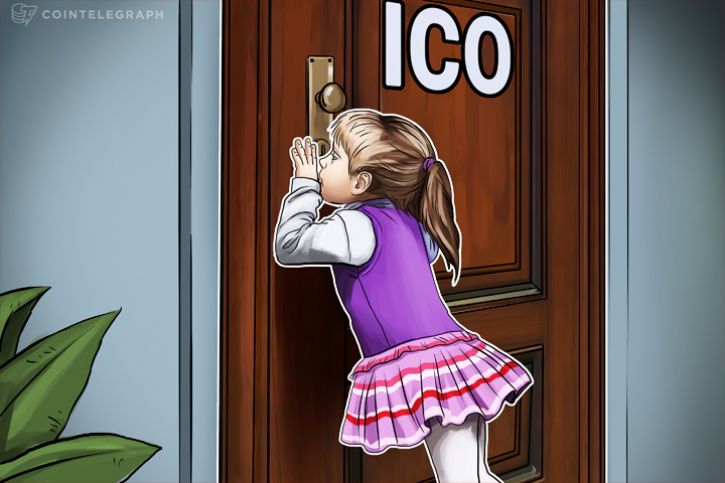 Please keep in mind Tezos (as an example) has been hit with multiple class-action lawsuits alleging fraud.

Around $6 bln has been raised via ICOs in 2017. Almost 37 percent of that amount was made by only 20 ICOs. Names like Filecoin, Tezos or Bancor created lots of buzz, but what happened to their tokens afterwards? Can investors get higher returns by buying tokens a few months after initial offerings?

The five largest ICOs from the top twenty by the amount raised show that returns on investment can reach up to 870 percent within three to four months. Please note that projects whose tokens are not tradable or traded for less than two months were not included in the review. The data was collected and processed within an ICORating agency research.

Progress: Tezos may have been one of the most promising ICOs of 2017, as its technology was intended to simplify launches for new projects and to compete with Ethereum. Though the project’s roadmap contains no exact deadlines, and its founder Arthur Breitman posted the last tech update on Dec. 22, it seems that the platform would not be launched anytime soon.

Moreover, Tezos has recently been filed with two lawsuits and accused of violating both US federal and state law. Its tokens were qualified as securities and, by not registering them as such, the company violated the Security Act. The project was also accused of fraud as tokens were distributed under the pretense of charitable contributions. Some of the investors have asked for refunds, but their claims were refused, which was explained by the fact that this was not presupposed by the initial agreement. Despite these issues, the price of Tezos tokens has never dropped below the ICO price and has shown a 12.4x return in US dollars since the ICO.

Bancor aims to introduce an easy way to issue smart-tokens and convert them with no counterparty. The project has made progress since Launch Festival 2017 when its app was only in test-mode. Now it can convert 14 cryptocurrencies including Ethereum and BTN token, but the token-issuing option is not available yet. Bancor token demonstrates the lowest returns for ICOs among the reviewed.

Progress: Status combines a mobile messenger and a browser to connect smartphone users with the Ethereum ecosystem. The founders stated that the beta-version was scheduled for Q2–Q3 2017 and that it would provide end-users with features such as encrypted messaging, a P2P exchange, an Ether wallet, etc.

The release seems to be delayed, though that doesn’t mean there is no progress. From weekly public reports posted by Status team leaders, it seems that sooner or later the project would be finished. Nevertheless, this couldn’t guarantee success with users.

Besides, the SNT token price is not growing exponentially, as no product uses their utility token to date. At the same time, there is no reason for a huge drop as the project is following its roadmap. All in all, the SNT token has multiplied its price by 16.2 since the ICO.

Progress: Kin IСO was rated as low risky and its hype level seems high. The Kin ecosystem seems to be another promising approach to so-called “conversational commerce,” which is still only a concept for almost every messenger except WeChat.

For the ICO market though Kin might  be one of the most viable projects as it has a tangible product and 300 mln active users per month. It is still a question how the average Kik user will liquidate their Kin. Also, there is no news about Kin’s integration with Kik which was scheduled for last quarter of 2017.

Kin’s plan to move from Ethereum also doesn’t seem to be straightforward as it was faced with investor complaints. Despite Kik’s advantages over the very similar Status platform, Kin tokens demonstrate one and a half the return, which is about +1,023 percent since the ICO.

Progress: TenX claimed to simplify the use of cryptocurrencies in everyday life. The project has already launched its app. Its Android version has been downloaded over 50,000 times since August despite being in beta mode. The app is still in development and its expansion is planned for the beginning of 2018. After exponential growth, the price of the PAY token dropped from $5.33 to less than $1.5, but overall it has added 550 percent in value since the ICO.

PAY token was also included in William Mougayar High Growth Cryptoassets Index, which is comprised of a strategic selection of undervalued crypto-assets.

Key to success and reasons to failure

In 2017 the most successful projects by ICO were those, which promised to make Blockchain and cryptocurrencies more suitable for common use: exchanges, deposits, payments, token issuing, rewards, etc. But that does not mean the project’s focus guarantees ICO and post-ICO success.

Generally, it is much more important for projects to have viable documentation and business goals, to follow the product roadmap and to inform investors about the progress on a regular basis.

At the moment the two major problems of the post-ICO market might be overestimation and transparency. For investors and funds, it is crucial to have relevant project evaluation both before and after ICO. Unfortunately, it is not always obvious for founders, — some of them go off media or rating radars after the successful initial offering and make projects susceptible to informational attacks.

Another reason is that founders could overestimate their project and deadlines to create more buzz before ICO. Thus the implementation is delayed, and investors are constrained to sell tokens.

These reasons, as well as other circumstances, could make token price drop down. Anyway, $6 bln was invested in tokens last year, so that the  post-ICO rating would matter a lot in 2018. 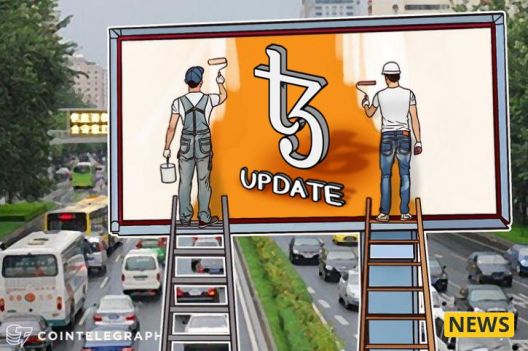 Tezos Foundation president Johann Gevers has sparked new controversy over the project after deleting a rare post about its future plans Monday, Jan. 29.

Tezos, which is at the center of several public lawsuits over delays issuing tokens from its $232mln ICO last year, continues to suffer from infighting between Gevers’ foundation and the project’s founders Arthur and Kathleen Breitman.

Conflicts among those in command of Tezos sparked a knock-on effect on users and third parties, with Gevers admitting the Foundation lost access to its funds between October and December. Banks had rescinded service to the Foundation “due to controversy,” he stated.

“…We were advised against making public statements until the disputes had been resolved, and that I had hoped for the tensions to be resolved quickly and without further public exposure,” the post continues.

“However, I believe the community has waited long enough and deserves regular updates going forward, even if this involves some risks.”

Despite the seeming change of tact, however, the push for “risky” transparency failed to last, Gevers removing the post shortly after publishing it Sunday.

This, Reuters quotes him as explaining in an update, was done for “prudential reasons.” The update is also no longer visible on Gevers’ Medium account as of press time Tuesday. Twitter user Gareth Moison subsequently published the cached post. 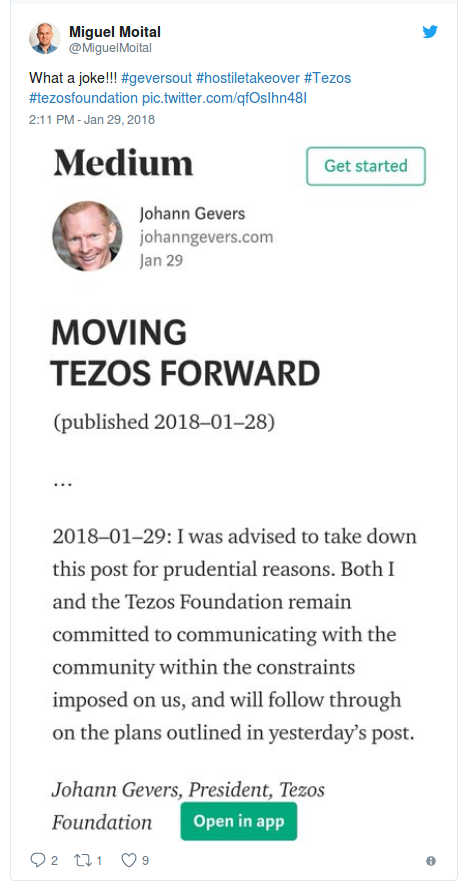 Continuing, plans for Tezos include a new CEO for the Foundation and temporary oversight from an unnamed figure as an “interim measure.” Gevers also proclaimed he would take a “step back” from duties once these measures were in place.

Tezos’ TEZ futures, operated by exchange HitBTC, lost 20% against the USD and 15% against BTC in the past 24 hours’ trading, averaging just under $4.