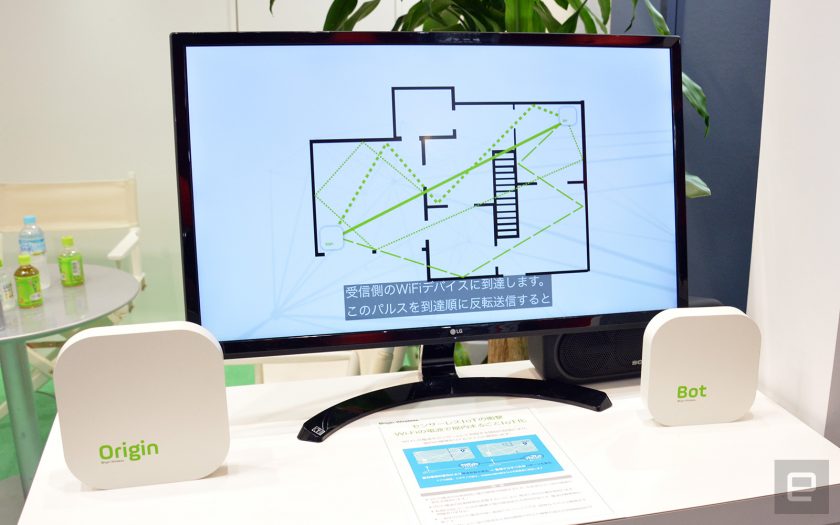 In the world of indoor security systems, motion detection usually relies on cameras or at least dedicated sensors. Both types of solution add to hardware plus installation costs, not to mention that not everyone is comfortable with having cameras pointing at them all the time. Origin Wireless, on the other hand, found a way to make use of WiFi signals bouncing around a room to detect even the slightest movement — down to something as subtle as a person’s breathing rate. What’s more, this “Time Reversal Machine” technology is essentially just some clever algorithmic work with little burden on the processor, so it can potentially be added to any existing WiFi mesh routers via a firmware update. In other words, security system vendors should take note.

A “Time Reversal Machine” setup consists of at least two hubs: one router is designated as an “Origin” transmitter, with the remaining routers acting as “Bot” receivers. Unlike the conceptually-similar Xandem which uses a 2.4 GHz signal, the Origin and Bot devices operate on 5 GHz over 802.11a, 802.11n or 802.11ac; and to avoid interference, the signal relies on CSI (channel state information) which is usually only used during mesh network configuration.

Due to the reflective nature of electromagnetic waves, a Wi-Fi signal would end up with over 500 multi-paths by the time it hits the “Bot” side, and they would arrive at different times as well. Normally, these multi-paths would be considered as the “enemies” of signal processing, but Origin Wireless took a different perspective and realized how much these signals could tell about the environment — more so than laser-based detectors, according to the company.

In a nutshell, the delay between these multi-paths is the magical property that defines the state of a room: if something moves, the multi-paths will obviously change and so will the delay. Origin Wireless’ software scans for such changes 50 times per second, and with a bit of calculation across delays plus machine learning, it can detect any motion with an impressive accuracy of 1 to 2 cm. Hence the “Time Reversal Machine” name. 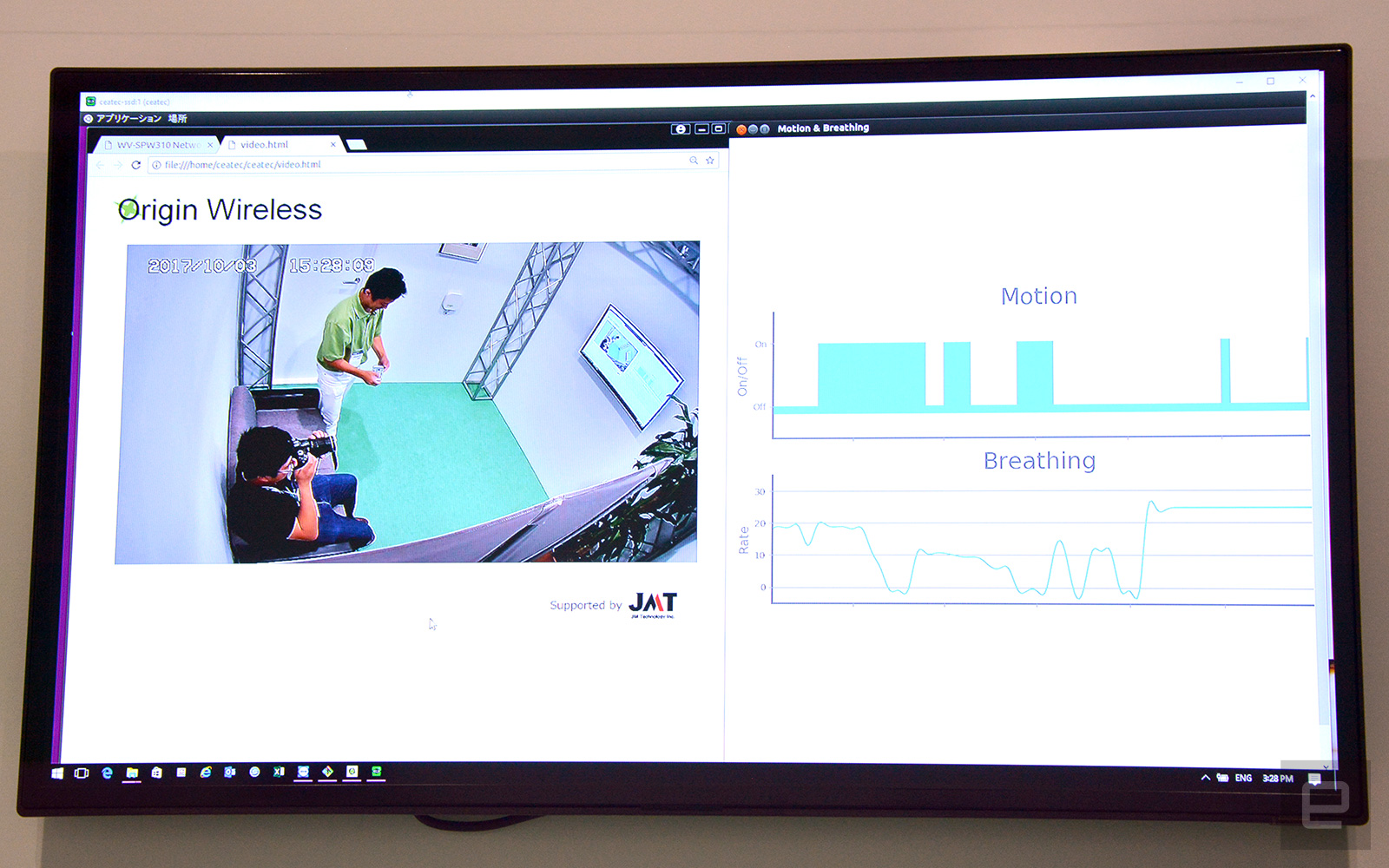 Admittedly, I was initially a little skeptical of this technology (I mean, come on, it is called a “Time Reversal Machine!”), but luckily, Origin Wireless had a live demo at its CEATEC booth. I was invited into a small room where I sat down with the demonstrator and remained still, and after a four-second delay, the lack of motion was reflected on a live monitor in front of us (the delay can be reduced by using local processing instead of the cloud). I was then instructed to breath steadily, and soon after the demonstrator left the room, I could see my breathing rate indicated as a flat line on the live chart (I intentionally kept my breathing as quiet as possible, in case the demo cheated using a microphone).

As creepy as it seemed given the lack of vital sensors, I was left impressed by how much could be achieved by using just WiFi signals. In fact, Origin Wireless believes that its Time Reversal Machine can do much more than just home security and vital monitoring. Consider this: if a person suddenly falls down, the software would detect a rapid change in the room’s state, followed by a long “silence.” This pattern could be configured to trigger a fall detection alert, which is good for elderly care — they wouldn’t need to face intrusive cameras at home, nor would they need to wear sensors. Other potential use cases include more precise intruder detection (by combining motion detection and breathing detection), indoor positioning via handheld WiFi devices, asset tracking, window or door open detection and more.

Of course, I can’t say that I’m totally convinced until I get to try this technology in real-life scenarios, but the fact that Dr. Ray Liu, the founder and CEO of Origin Wireless, is currently a member of the IEEE Board of Director (and was previously the President of IEEE Signal Processing Society) should lend credibility. More importantly, Liu’s startup has already filed over 60 patents, over 10 of which have been granted in the US. If this Time Reversal Machine is as solid as it claims to be, here’s hoping that router manufacturers will start integrating it into upcoming — and hopefully existing — devices in the very near future.

Security system watches over your home without cameras 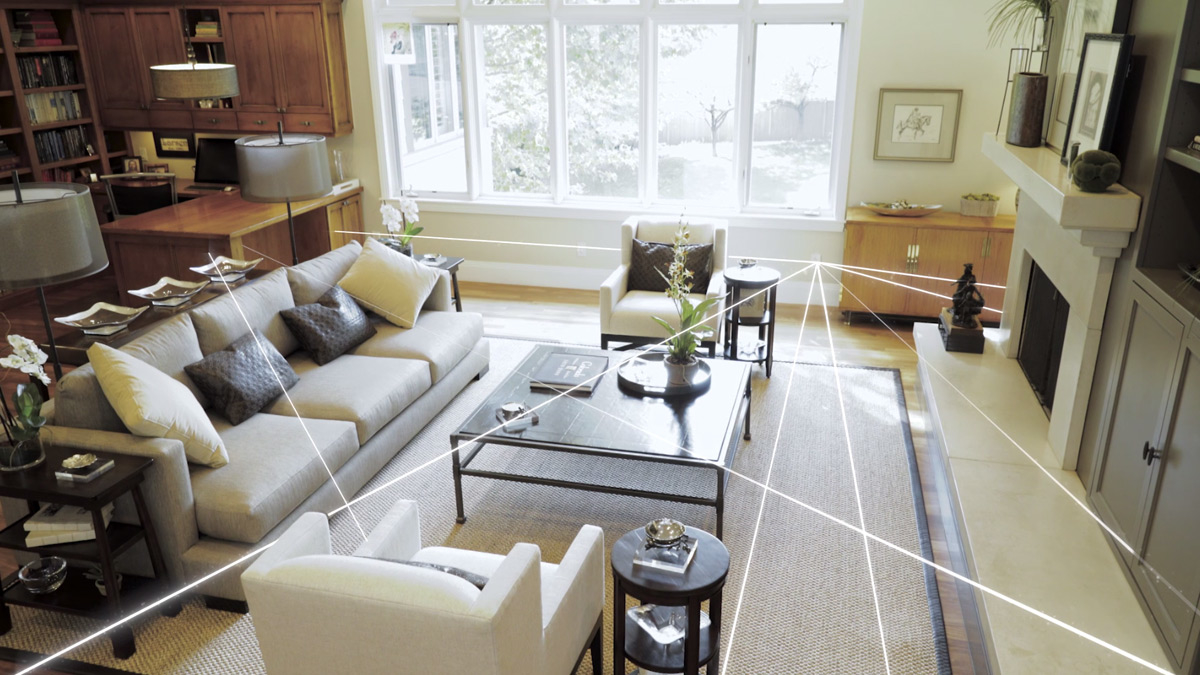 You don’t have many great choices for home security systems right now [in 2015]. Conventional systems are expensive and effectively fixed in place, while connected cameras are conspicuous and carry the risk (however small) that someone might spy on you. Xandem thinks it has a better way, however. It’s crowdfunding a security system that uses motion-detecting wireless mesh networking (previously the stuff of research) to alert you to intruders. It only requires plug-in nodes to work, and the resulting radio frequency web can both travel through objects and follow subjects. If all goes well, you’re getting more complete coverage that stays hidden and reduces the chance of a false positive — you can even track motion in apps or the web to see if it’s a burglar or just a family member who got home early.

Xandem isn’t cheap up front: you’re looking at a minimum $475 pledge to get a 10-node system, and $575 for 15 nodes. However, early bird buyers get the accompanying cloud service free for life. Even the latecomers skip the $120 yearly subscription for the first year. That’s potentially a big discount if you’re both aiming for broad coverage and plan to use the service for a long while. You won’t get yours until August, assuming the project meets its funding goals, but your patience may pay off if you don’t think existing home security technology cuts the mustard. 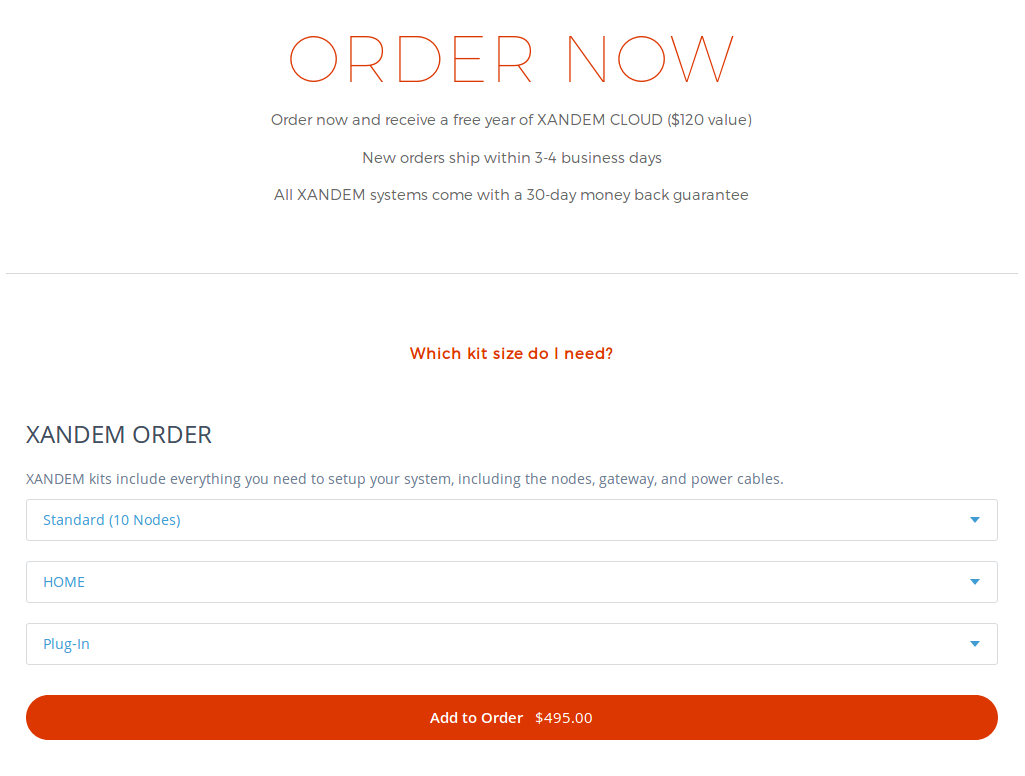