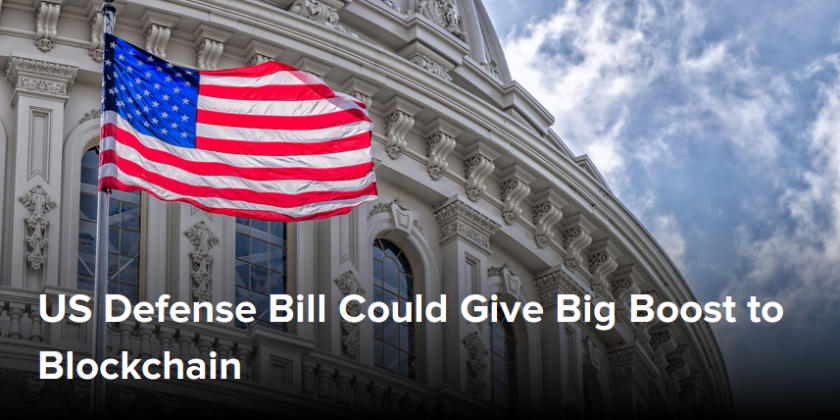 An obscure provision tucked into a defense spending bill could serve as a springboard for blockchain adoption across U.S. government agencies.

Part of a larger bill called the National Defense Authorization Act (NDAA), the Modernizing Government Technology Act (MGT) will allow the public sector to redirect cost savings (which normally must be returned to the Treasury Department) into internal working capital funds that can be used to upgrade their IT systems.

It authorizes agencies to use the working capital funds for modernization projects that fall into one of three buckets: cybersecurity, migrating legacy systems to the cloud and “other innovative platforms and technologies.”

As such, while blockchain is not explicitly mentioned in MGT’s text, it fits into the letter of the law’s parameters and objectives to advance the technology beyond the proof-of-concept stage at the agency level.

Based on what U.S. government officials have said in the past, Trey Hodgkins, senior vice president of public sector at the Information Technology Industry Council in Washington, D.C., told CoinDesk:

“Blockchain was clearly one of the technological capabilities that Congress meant for agencies to look at, and what they were trying to do was create dollars with some flexibility to them so that agencies would have their own discretion on what they invest in.”

Far from being held up in legislation, however, the MGT could soon have an impact. The NDAA has been passed by both the House of Representatives and Senate, and is awaiting President Donald Trump’s signature, at which point it would become law.

Companies looking to provide enterprise blockchain services to the public sector echoed Hodgkins’ optimism that the act could provide a pathway toward increased funding and experimentation at the governmental level.

“We are excited about the MGT Act because it provides incentives to federal agencies to move away from high-cost, low performing legacy systems toward new technologies, like blockchain and smart contracts,” said Todd Miller, U.S. markets lead at ChromaWay, a hybrid blockchain database provider in the process of opening a Washington D.C. office.

Jeremy Wilcox, managing director for public sector at technology consultancy ClearEdge Partners, said the act could be a “catalyst” for the technology, even if agencies were to only redirect a small percentage of the funds toward blockchain.

The flexibility afforded by the MGT could also give agencies some workaround to a congressional appropriations process that has been marred by political logjam.

Rather than passing annual budgets, Congress, in recent years, has passed a series of appropriations bills that temporarily extend what was authorized in the prior period. This dynamic has hamstrung agency’s efforts to secure funding for technology upgrades.

“Sadly, it’s a completely dysfunctional process, and for newer technologies, it’s really challenging to get an agency to the point where they have the ability to plan for and design and architect, and then go out and buy something and then deploy it,” said Hodgkins.

MGT could change that dynamic by giving agencies more discretion in deciding which technology upgrades to pursue and how to go about paying for them.

“They won’t have to go to Congress and say, ‘Can we have a line item for blockchain in our budget?’ “

But even though the MGT provides a window of opportunity for blockchain within government “modernization” projects, the technology must demonstrate it has utility at an enterprise level before agencies can fully embrace it.

While cloud computing and relational databases are proven in their reliability, their capacity to scale and their ability to replace existing legacy systems at a large organization like a government agency, blockchain solutions still have a ways to go in demonstrating that same level of credibility.

Government agencies are, after all, still grappling with the cybersecurity risks associated with blockchain.

In a separate section, the NDAA stipulates that the Pentagon monitor government agency adoption of blockchain for cybersecurity risks and provide a briefing to Congress within 180 days.

The bill states the Secretary of Defense must provide Congress with: “[A]n assessment of the use or planned use of such technologies by the Federal Government and critical infrastructure networks.”

This briefing must also include assessments of the technology’s use by foreign powers and criminal and extremist groups, but also “a description of potential offensive and defensive cyber applications of blockchain technology and other distributed database technologies.”

“If blockchain is tied to modernization then it could be a part of that solution,” said Wilcox, concluding:

“Time will tell. It’s going to come down to what solutions or services are delivered.”