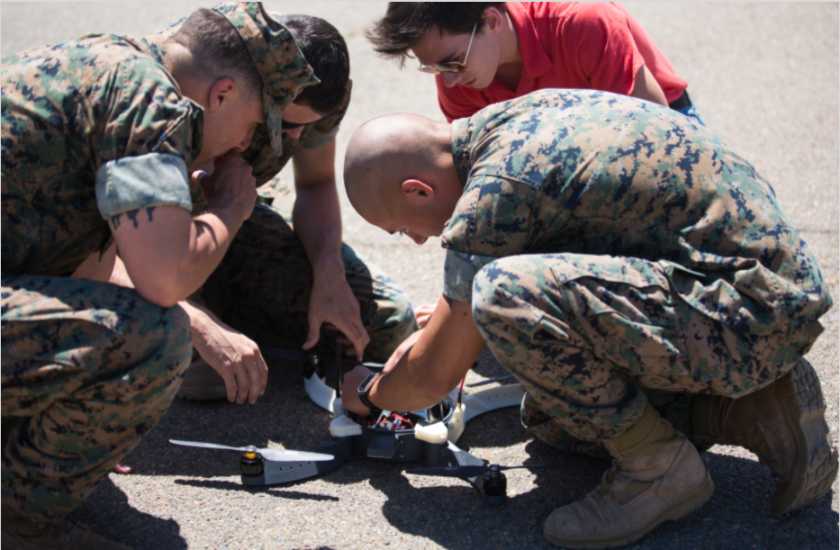 Marines with 1st Marine Division repair an unmanned aerial vehicle after a flight attempt at Camp Pendleton, June 15, 2017. The Marines built, The Nibbler, a four- rotor UAV with a 20-minute flight time capable of looking over hills and around buildings providing an intelligence advantage over the enemy. US Marine Corps photo.

THE PENTAGON – Marines who recently completed a deployment to U.S. Central Command in support of Operation Inherent Resolve brought with them 3D printers to make their own small quadcopters, learning lessons both on hybrid logistics models and counter-unmanned aerial vehicle (UAV) operations.

Col. Bill Vivian, commanding officer of the 7th Marine Regiment who also led the last Special Purpose Marine Air-Ground Task Force (MAGTF) Crisis Response unit in U.S. Central Command, told reporters today that his Marines built an initial batch of 25 Nibbler UAVs – quadcopters with a dwell time of about 20 to 25 minutes, which can carry cameras or other intelligence payloads and cost about $2,000 apiece to print – and then followed up by making a couple additional vehicles and other various tools and components as needed for the SP-MAGTF.

Attempting this additive manufacturing at a tactical level was part of an “advancing the force” mission assigned to the SP-MAGTF, to push the Marine Corps closer to its vision laid out in last year’s Marine Corps Operating Concept. A total of 48 personnel were taught to run the 3D printers, set up in what was dubbed the Ripper Lab, after the unit’s call sign – 44 Marines and sailors from the SP-MAGTF, and four Air Force personnel assigned to a security detachment.

Vivian said many of the Marines involved already had experience with writing computer codes, using 3D printers, soldering and other skills needed for the drone assembly, so “just taking advantage of the natural talents we already had out there, we were able to pull them in and use them to our advantage. It helped retention – the Marines were very excited that we were able to do some things faster than we otherwise would have.” 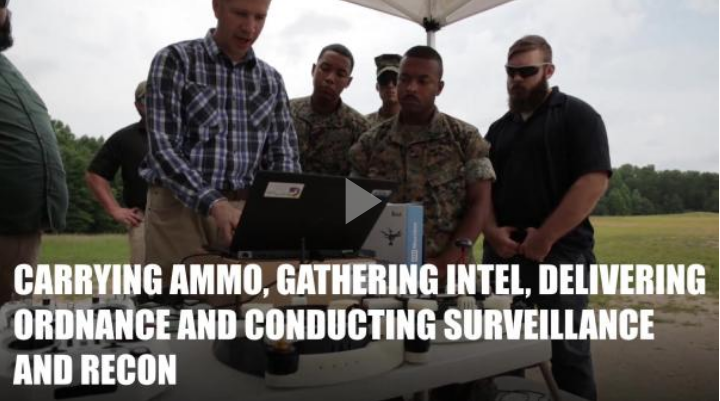 The drone-printing effort contributed to several learning efforts. First, a Hybrid Logistics Working Group had been stood up, with additive manufacturing being a prime focus for the group. The SP-MAGTF’s logistics officer, Maj. Miguel Cruz, had monthly meetings with Marines at headquarters, Installations and Logistics and other service stakeholders, as well as groups outside the Marine Corps such as the Defense Advanced Research Projects Agency (DARPA).

“As we wrestled with additive manufacturing at the tactical level, whenever we came into a policy conflict we were able to tap into that group in order to start to address some of those questions,” Vivian explained.

“What I think we learned from that is, you need the push-pull, where Marines at the lower tactical level are trying to solve problems today, and you need that immediate feedback to the policy level so that they can remove barriers, because we naturally found them. This is new and everybody is exploring it. Through that working group we were able to do it a lot faster.”

Cruz said Headquarters Marine Corps is spending the next two weeks looking at draft policy on additive manufacturing, and the feedback from the SP-MAGTF experience in the Middle East is shaping that policy.

“The repair parts, there’s intellectual property rights and there’s contractual issues, and we had to grind through a lot of those – and it’s not done, that’s going to take a while,” Vivian said of the challenges they addressed with the working group.

“Those are some of the biggest issues, but in the MAGTF we had a lawyer, a staff judge advocate on our staff, he helped out, and then reaching back to CONUS here we were able to talk to the people who actually write the contracts and start to steer that in a more productive direction that would actually allow additive manufacturing to contribute more.”

Building and fielding the Nibbler drone allowed the Marines another opportunity as well – to understand what ISIS and other adversaries are doing themselves, and to therefore be able to learn how to defend against it.

“It built an understanding of how these things are put together. They can be locally manufactured, and we know that ISIS is doing some of that. And then how can it be used, what are its strengths and weaknesses, what are its limitations so that the Marines would better understand the threats that were being used against them,” Vivian explained.

“They’re facing them every day and the threat is growing, and so we got in some very good discussions, they really were taking that onboard. Marines being Marines, it just really tapped into their ingenuity.”

The 7th Marine Regiment provides the ground combat element for all the rotations of the SP-MAGTF in Central Command, and after Marines continuing to come back home and report the drone-related challenges they faced, the regiment stood up a Counter-UAS Working Group in January 2016 to begin to train Marines for that threat.

“The Marines were coming back from deployment saying that hey, we’re seeing quadcopters and things like that going over our positions, so we started to inject that into our training,” Vivian said.

“There’s not a lot the regiment can do on its own in order to defeat that threat, so we really worked on mitigating it – practicing good procedures, reducing our signature and things of that nature so we’d be less vulnerable to it. And then when we deployed we stepped it up a notch – because we were at so many locations across the theater and there are so many different approaches being taken by the joint force, we were exposed to almost all of them, so we tried to bring that together so we can harness that and build that knowledge for our Marines.”

Vivian said a SP-MAGTF operating forward is the perfect setup for innovation and learning, due to the synergy that comes from having the full range of Marine Corps assets operating under a single commander.

“It kind of provides a bias of problem-solving and looking for original solutions, because you have that mix of different capabilities,” the colonel said. Also, from an operational standpoint, “some of the best innovation comes when people have practical problems they’re trying to solve. It actually stimulates the creativity to advance the state of the art. That’s kind of what we lived every day.”

Marines involved in the additive manufacturing effort found all kinds of ways to innovate during the deployment. Cruz said the team was working with a few different printers, ranging in size from 8-by-8-by-8 inches to about 18-by-11-by-8 inches. Within those size confines, the Marines found all kinds of things to print – wrenches, assembly parts, medical devices like splints, protective covers to shield expensive equipment from repeated impact, and even a cover for a laser device that was on back order for seven months and was instead printed in a single day.

As the Marines look to implement the vision outlined in the Marine Corps Operating Concept, which calls for all squads to have a small UAV for surveillance or other missions, this 3D printing initiative and the Nibbler UAV itself – for which the Marine Corps owns the design and can therefore alter it as needed as mission requirements and the threat environment evolve – are providing a first look at what Marine operations in the next decade may look like.