The launch of a new ‘censored’ mining pool has some Bitcoiners worried its a harbinger of things to come.

The pool will use BlockSeer and Walletscore’s labeling data among other verified sources, such as the United States Office of Foreign Assets Control (OFAC) blacklist for crypto, to identify BTC transactions it does not wish to process. The pool also requires all miners to pass Know-Your-Customer (KYC) protocols. DMG’s COO Sheldon Bennett stated:

“The pool is focused on being devoid of transactions from known nefarious wallets which use this medium in ways that continue to sully the reputation of crypto currencies, specifically Bitcoin, in the mainstream as well as to impede widespread adoption”

Former Monero lead developer Riccardo Spagni (@fluffypony) suggested on Twitter this could be the start of a slippery slope. He speculated that transaction censorship from Bitcoin mining pools may become widespread as a result of regulatory pressure and said the concern was of: “regulators looking at this and thinking it’s a good idea ‘for extreme cases like the OFAC crypto list’, then it becomes enforceable.”

“Stuff like p2pool & Stratum v2 make it practically unenforceable, and I’d rather rely on that than a hope & a prayer.”

P2pool is a decentralized Bitcoin mining pool that was established in 2011. The Stratum V2 draft, by Braiins, is a complete overhaul that implements BetterHash, a secondary protocol that enables mining pool constituents to decide the composition of the block they will mine — instead of pools having control over which transactions to include in each block. This should make pool censorship impossible. According to Braiins co-founder Jan Capek, the draft still needs formal review, but will receive grants from Square Crypto for further development.

Founder of Wallet Scrutiny website Leo Wandersleb suggested the “slippery slope” of censorship “will lead to a soft fork” where pools following this approach will reject building “on blocks that don’t use their filters.” 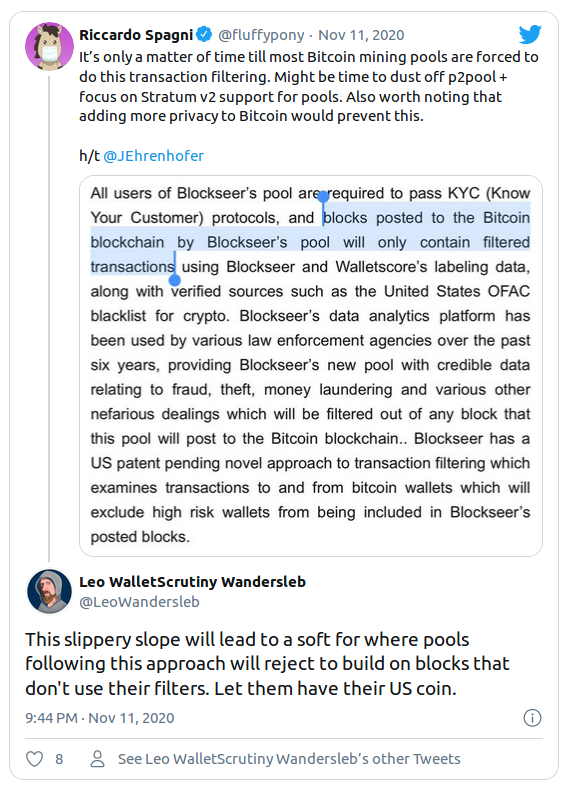 Not all are not convinced that transaction censorship is enforceable without the majority of miners supporting it. BlockTower CIO Ari Paul said that even if just one miner does not comply, then there is the possibility for blacklisted transactions to be included, but added:

“There is a problem though — the 99% (or 51%) could choose to orphan any block with a blacklisted address, but this requires collusion.”

Erik Voorhees, believes the time will come when transaction censorship poses a serious threat to Bitcoin:

“This is not an imminent problem, but it is coming. Now is the time to prepare for it.”