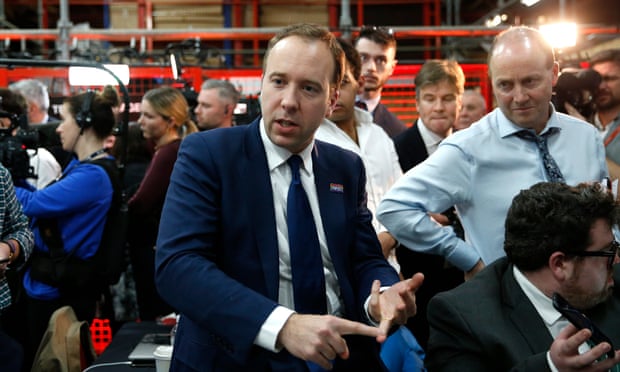 Details of contract agreed by the health secretary, Matt Hancock, came to light after FoI request.

Amazon has been given free access to healthcare information collected by the NHS as part of a contract with the government.

The material, which excludes patient data, could allow the multinational technology company to make, advertise and sell its own products.

In July the health secretary, Matt Hancock, said a partnership with the NHS that allowed Amazon Alexa devices to offer expert health advice to users would reduce pressure on “our hard-working GPs and pharmacists”.

But responses to freedom of information requests, published by the Sunday Times, showed the contract will also allow the company access to information on symptoms, causes and definitions of conditions, and “all related copyrightable content and data and other materials”.

Amazon, which is worth $863bn and is run by the world’s richest person, Jeff Bezos, can then create “new products, applications, cloud-based services and/or distributed software”, which the NHS would not benefit from financially. It can also share the information with third parties.

Labour’s shadow health secretary, Jonathan Ashworth, told the Sunday Times that the government was “highly irresponsible” and “in the pocket of big corporate interests”.

Eva Blum-Dumontet, a senior researcher at Privacy International, which obtained the contract, said the issue with the partnership was not about “data sharing” but about “transparency”. Several sections have been redacted by the Department of Health and Social Care to protect Amazon’s commercial interests.

An NHS spokesperson said: “No patient data is being provided to this company by the NHS, which takes data privacy extremely seriously and has put appropriate safeguards in place to ensure information is used correctly.”

Amazon told the Sunday Times the content it had access to was already on the NHS website. “Amazon does not build customer health profiles based on interactions with nhs.uk content or use such requests for marketing purposes,” it added.

Third parties, such as local authorities, can reuse information from the NHS website, but standard agreements only permit this to be used in the UK. The contract with Amazon states that the licence applies around the world.

A spokesperson for the company said: “General health-related content from the NHS website is now available to Alexa users via voice technology. The new option is particularly useful for those with accessibility needs who may not have been able to easily access nhs.uk content via a mobile device or computer in the past.”

Earlier this week, the company was singled out by tax transparency campaign group Fair Tax Mark as the worst of the big six US tech firms for avoiding tax by shifting revenue and profits through tax havens or low-tax countries.

The NHS is a goldmine of patient data which the United States wants to be quarried by some of its biggest companies.

Britain’s health service is home to a unique medical dataset that covers the entire population from birth to death. Jeremy Corbyn’s NHS press conference revealed that the US wanted its companies to get unrestricted access to the UK’s medical records, thought to be worth £10bn a year. A number of tech companies – including Google – already mine small parts of the NHS store. Ministers have been treading carefully after an attempt to create a single patient database for commercial exploitation was scrapped in 2016 when it emerged there was no way for the public to work out who would have access to their medical records or how they were using them.

However, such caution might be thrown to the wind if Boris Johnson gets his way over Brexit – and patients’ privacy rights are traded away for US market access. This would be a damaging step, allowing US big tech and big pharma to collect sensitive, personal data on an unprecedented scale. Donald Trump’s officials have already made clear that this is what they are aiming for. In the leaked government records of talks between US and UK trade representatives White House officials state that “the free flow of data is a top priority” in a post-Brexit world. Trump’s team see Brexit as an opportunity “to avoid forcing companies to disclose algorithms”.

The US wants the UK to drop the EU’s 2018 data law, in which individuals must be told what is happening with their medical data, even if scrubbed of personal identifiers.

If there is a wild west of patient privacy, it is found in the US. More than 90% of US healthcare organisations admitted to data breaches between 2014 and 2016, leading to cases of medical fraud and insurance discrimination. Given the stakes, there must be concerns about how an arm of the department of health and social care sold data about millions of NHS patients, derived from GP practices, to US companies without anybody apparently informing patients. GP records contain sensitive information, such as details of a person’s mental health conditions and diseases such as cancer, as well as smoking and drinking habits. It is also extremely worrying that Matt Hancock, the health secretary, thought it was right to sign a deal with Amazon that put no restraint on its ability to build profiles of patients who use its Alexa voice assistant to access NHS information.

This might be just the start. If Mr Trump got his way, UK patients would be unaware their data would be processed offshore by a Silicon Valley giant. They might also not know that big tech could use what it learned from that process to invent medical devices that could then be sold back to the NHS. Alan Winters, a leading economist, told the Times: “You could end up where the UK is unable to analyse its health data without paying a royalty to Silicon Valley to use an algorithm. Once the algorithm has been written and copyrighted by an American company, if the NHS tried to do the same in the UK it could be sued.”

The Conservative party manifesto says it “will invest in health data systems”. Whatever for – given the NHS may be forced into selling off its most valuable asset so that US corporations can profit from it at our expense? There may be an argument that in doing so this country might become a vital cog in US Inc. But this is a narrowing of the UK’s potential. Why not aim to build up our own expertise by training NHS researchers in the latest computational techniques so that they can invent new medical procedures that can save lives? After all, making artificial hips has become a multibillion-pound global business. But it was in the state-run NHS – not in the world of private US medicine – that total hip replacement was pioneered. Monopolies, state or private, can get complacent. The answer is not to turn the NHS into a haven for all the excesses of free enterprise in a trade deal with Mr Trump.