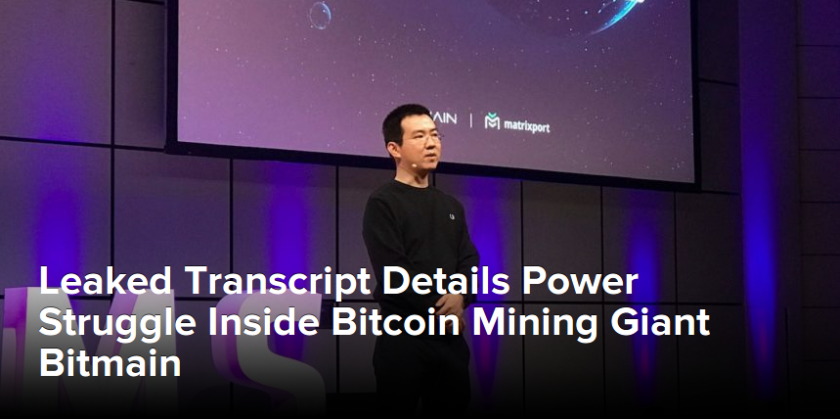 A transcript of a Bitmain staff meeting reveals an ugly power struggle inside the world’s biggest bitcoin miner maker that led to the abrupt ousting of co-founder Micree Ketuan Zhan.

CoinDesk has obtained and verified a partial transcript from the hourlong meeting on Tuesday. In it, Jihan Wu, a co-founder of Bitmain who started the company with Zhan in 2013, explained to all employees why he thought it was necessary to oust his long-time partner and former co-CEO.

After stepping down from day-to-day management in December 2018, Wu returned Tuesday as chairman of the company and executive director of the Beijing Bitmain subsidiary. He immediately made his presence felt.

Earlier in the day, Wu notified staff that Zhan had been dismissed from all his roles, effective immediately. During the subsequent all-hands meeting, he described a falling-out between the two executives late last year.

“Zhan escalated what should be a disagreement on an ordinary company business decision to the level of power struggle,” Wu told the staff.

Wu said in Tuesday’s meeting that he and Zhan have butted heads since 2015.

However, things came to a head in December 2018 when Bitmain decided on a round of major layoffs. Wu pushed for the layoffs, while Zhan initially resisted.

According to Wu, he and three other founding members of Bitmain tried to persuade Zhan to reach a unanimous decision on the layoffs, which Wu and others viewed as necessary for saving the company.

Zhan remained unconvinced, however, and tried to rally other senior and mid-level management against the layoff plan, Wu said, only to find out that most supported it.

“Everyone knows in 2018, the company spent unnecessary and hasty investment everywhere on research and development projects and hiring dozens and hundreds of people without a second thought. Everyone supported the layoffs.”

Still, Zhan ordered a second meeting on Dec. 17, arguing that he should be the sole CEO and threatening to void stock-option incentives for whoever wouldn’t back him up.

In the end, Zhan’s second attempt failed, Wu said, but the two came to an agreement to both step down as co-CEOs and Bitmain moved ahead with the layoffs.

“I know Zhan is an insecure person and can be bitter. I chose to take a further step back and let him take the glory role of chairman,” Wu said in the meeting.

However, the turmoil caused serious divisions within the company and spooked Bitmain’s trading partners, at a time when the crypto market was at its bottom, according to Wu’s account.

“Right on that day, we had suppliers calling us to push for clearing accounts payable. The Bank of Beijing already agreed to give us credit lines but that got cut the next day,” Wu said, adding:

“Had it not been the bounce-back of the bitcoin price in later months … the company may not have been able to weather through the winter last year.”

“Our mining equipment’s market share is declining,” he said. “Our mining pools’ dominance is also declining.”

Indeed, Bitmain’s major rival miner makers including Canaan, WhatsMiner and InnoSilicon have all been able to increase sales following the market boom this year.

Meanwhile, BTC.com and Antpool, Bitmain’s flagship mining pools, lost their long-time dominant positions to Poolin – founded by former BTC.com creators – and F2Pool. Poolin and F2pool are currently the top two mining pools in the world, based on the real-time hash rate distribution.

Calls to Zhan’s mobile number, as well as subsequent text messages requesting comment, were not answered. However, a Tencent News report said on Wednesday that Zhan has already started approaching lawyers in an aim to bring a lawsuit against Bitmain.

Wu and Zhan seem to have sparred over what Wu called Zhan’s “crazy” ideas – namely doubling down on the company’s artificial intelligence (AI) business, which is unrelated to bitcoin mining.

According to Wu, some of Zhan’s ideas included getting finance and accounting employees in Shenzhen to take up sales roles for AI products.

“Who will be handling our book in Shenzhen? How are we going to present the financial data for [an] IPO?” Wu asked, adding:

“Recruiting 300 fresh graduates? How many staff do we have right now? Do we have sufficient resources to train them if we recruit this many people in one shot?”

He further alleged that Zhan recently proposed investing more in a business that was already “distressed” and had burnt out the firm’s core developers who are “sick at home.”

According to the Tencent News report, Bitmain has already filed an application in the U.S. seeking to go public again. The confidential filing was reportedly submitted one week before what the news outlet described as Wu’s coup.

The report added that on Oct. 28, one day before Wu’s email, Zhan was still attending a conference in Shenzhen on behalf of Bitmain to promote its AI products.

Zhan returned to Beijing after the news broke on Tuesday, but has been barred from entering the company’s offices, Tencent News said.

However, a major question remains unanswered: How did Bitmain manage to dismiss Zhan from all of his roles given that he was the chairman and major shareholder?

Prior to the December 2018 shake-up, Zhan held 36 percent of Bitmain’s holding company while Wu had just 20.25 percent, according to Bitmain’s 2018 IPO filing in Hong Kong citing data from September 2018.

Other major shareholders include founding members Yuesheng Ge (4.18 percent), Zhaofeng Zhao (6.26 percent), and Yishuo Hu (4.18 percent), as well as a trust that held 18.47 percent as the company’s employee stock-option incentive.