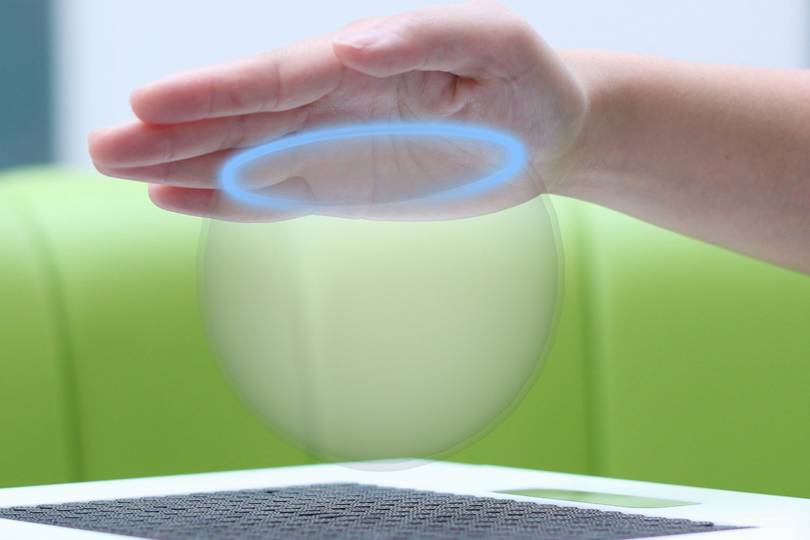 Haptic technologies are big business these days, and joining the burgeoning scene is a team of researchers from Bristol University, who’ve found a way to create invisible “three-dimensional haptic shapes in mid-air using focused ultrasound”.

“What we aim to do is give you the feeling of touch without you touching anything,” explained computer scientist at Bristol University’s Interaction and Graphics group Professor Sriram Subramanian to WIRED.co.uk.

The team’s research, published last week in the journal of ACM Transactions on Graphics (TOG), works by emitting sound pressure waves from thousands of miniscule speakers.

Making use of a Leap Motion sensor that tracks the position of an individual’s hand, the team’s system pinpoints where exactly in the air to create the haptic object. When human hands come into contact with these waves, they conjure the feeling of touching haptic holograms in mid-air. “Our sense of touch is good at distinguishing subtle changes in how you perceives an object,” says Subramanian, who remarks that the team wish to create a rich tactile sensation.

As this mid-air haptic feedback “eliminates the need for any attachment” or “contact with physical devices,” the team hopes it will have practical implications in museums, operating theatres, and within the consumer electronics and automotive industry in the near future.

Commenting on the growing popularity of touchless sensing, Subramanian said that companies such as LEAP and Microsoft Xbox Kinect were all pushing forward this technology. He explains, however, that touchless technologies can make people miss the sense of feeling, subsequently making them feel like they are floating in and out of context.

Having founded their startup Ultrahaptics in December 2013, what the team aims to do with their system is “eliminate the disadvantage of being touchless,” says Subramanian.

While still in its early days, Ultrahaptics aims to let surgeons visually explore the insides of a human body, with researchers at Bristol hoping that they will be able to explore CT scans with haptic feedback, which will allow them to feel tumours, for example.

Subramanian notes that further research is necessary for the person experiencing the 3D hologram to feel the exact textures and weight of a replicated object. Nonetheless, within the museum context, he states that more immersive educational opportunities might be possible in the future. “In museums, the artefacts are behind a glass screen, but you might want people to have some sense of feeling of it, or rotate it. With our system, you get some feeling that you touched the object,” explains Subramanian.

At present, the technology is limited to interaction with hands and bare skin, with Subramanian noting that the ultrasound waves will not yet penetrate fabric. For a commercial usage, he suggests incorporating the system into a car, with the Ultrahaptics sending a “tingle” to the left side of a driver’s neck — where the blindspot is — to indicate another car’s approach. The team also hopes to incorporate the technology into current VR systems, in order to enhance the simulated 3D virtual environment by adding a tactile dimension.