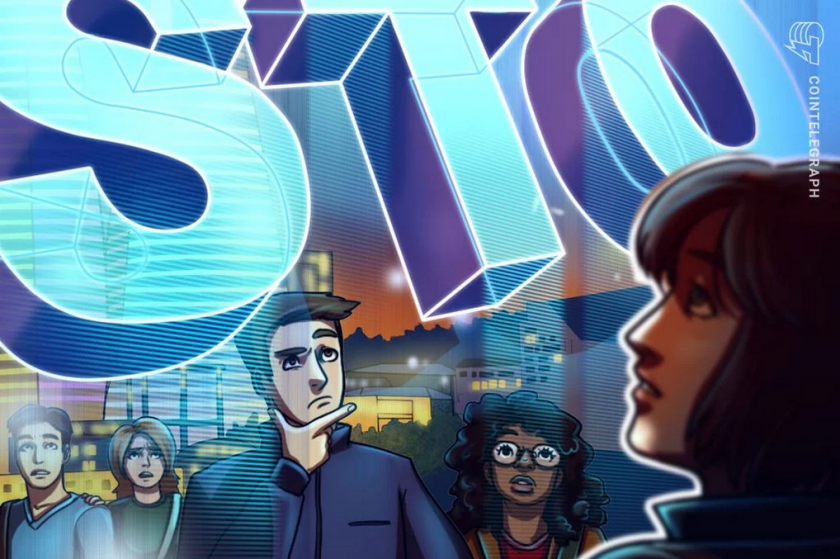 Similar to an initial coin offering (ICO), an investor is issued with a crypto coin or token representing their investment. But unlike an ICO, a security token represents an investment contract into an underlying investment asset, such as stocks, bonds, funds and real estate investment trusts (REIT).

A security can be defined as a “fungible, negotiable financial instrument that holds some type of monetary value,” i.e., an investment product that is backed by a real-world asset such as a company or property.

A security token, therefore, represents the ownership information of the investment product, recorded on a blockchain. When you invest in traditional stocks, for example, ownership information is written on a document and issued as a digital certificate (e.g. a PDF). For STOs, it’s the same process, but recorded on a blockchain and issued as a token.

STOs can also be seen as a hybrid approach between cryptocurrency ICOs and the more traditional initial public offering (IPO) because of its overlap with both of these methods of investment fundraising.

2. How is an STO different from an ICO?

It is the same process, but the token characteristics are different.

STOs are asset-backed and comply with regulatory governance. Most ICOs, on the other hand, position their coins as a utility token that give users access to the native platform or decentralized applications (DApps). The purpose of the coin, they argue, is for usage and not for investment. As a result, ICO platforms circumvent certain legal frameworks and do not have to register or comply with the strict governance of regulatory bodies.

The barrier to entry for companies to launch an ICO is, therefore, much lower, as they do not have to do all the upfront compliance work. They are also able to sell their coins (i.e., raise funds) to the wider public.

It is much more difficult to launch an STO, as the intention is to offer an investment contract under securities law. Therefore, these platforms will have to do the upfront work of making sure they comply with the relevant regulations. They would typically also only be able to raise funds from accredited investors who have themselves passed certain requirements. 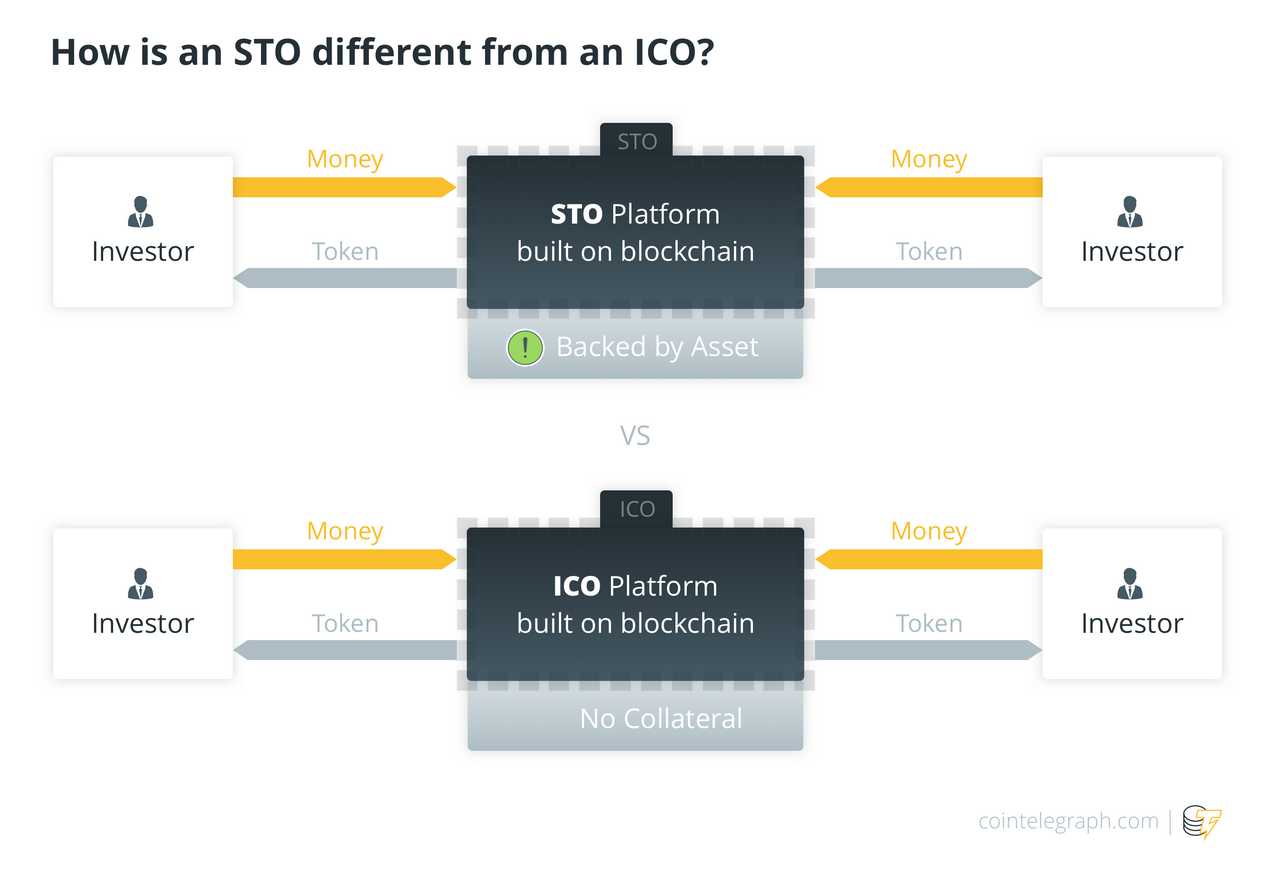 3. How is an STO different from an IPO?

Again, it’s the same process, but STOs issue tokens on a blockchain while IPOs issue share certificates on traditional markets.

Although both are regulated offerings, IPOs are only used in private companies that want to go public. Through the IPO process, they raise funds by issuing shares to accredited investors.

With STOs, tokens that represent a share of an underlying asset are issued on the blockchain to accredited investors. These can be shares of a company but, because of tokenization, can really be of any asset that is expected to turn a profit, including a share in the ownership of a property, fine art, investment funds, etc.

STOs are also more cost-effective than IPOs. With IPOs, the companies would typically pay high brokerage and investment banking fees to get access to a deeper investor base. STOs would still need to pay lawyers and advisors, but they offer more direct access to the investment market and, therefore, typically won’t have to pay large fees to investment banks or brokerages. The post-offering administration for STOs is also less cumbersome and cheaper than with traditional IPOs. 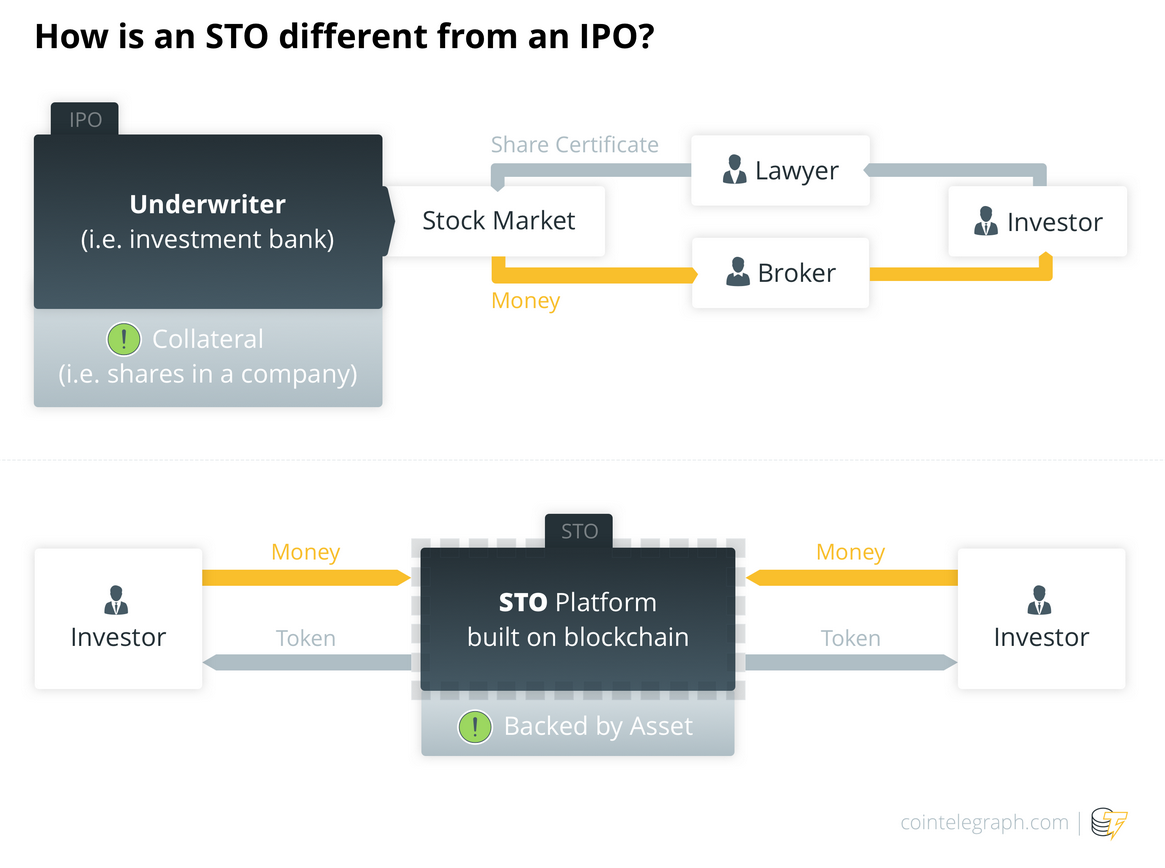 4. How are STOs defined and regulated around the world?

This will very much depend on the individual jurisdictions.

The Securities and Exchange Commission (SEC) in the United States is perhaps the most vocal on the issue of how a security token is defined, and whether or not certain utility tokens are, in fact, security tokens that should be regulated.

In their Decentralized Autonomous Organization (DOA) report in July 2017, the SEC concluded that the DAO ICO was, in fact, a security offering under the qualification of an investment contract.

According to the SEC, ICOs will be classified as a security if they fall under the definition of an investment contract, which was established by the Supreme Court and derived from a landmark case between the SEC and The Howey Company.

Now known as the Howey Test, it states that:

“An investment contract is (1) an investment of money (2) in a common enterprise (3) with a reasonable expectation of profits (4) to be derived from the entrepreneurial or managerial efforts of others.”

The DAO report also concluded that “the investment of ‘money’ need not take the form of cash.” and in a Senate hearing on Feb. 6, 2018, SEC Chairman Jay Clayton also said:

“I believe every ICO I’ve seen is a security.”

However, a bill that seeks to exempt digital tokens from securities law and taxes will be reintroduced to the U.S. Congress “soon,” according to a Feb. 14 tweet from U.S. Congressman Warren Davidson.

#TokenTaxonomyAct Thanks to all who have shared input. @RepDarrenSoto & I are excited about the revisions and look forward to reintroducing this bipartisan bill soon. We continue to inform our colleagues about the urgent need for light-touch regulatory certainty. #blockchain

In it, the FCA distinguishes between three types of tokens:

Switzerland’s Financial Market Supervisory Authority (FINMA) released its ICO guidelines on Feb. 16, 2018, stating each case must be decided on its individual merits but, similar to the FCA, also categorized tokens into three groups:

Other jurisdictions that allow regulated STOs include Singapore, Estonia and Malta.

5. Are all governments open to the idea of STOs?

While in other countries — like Thailand, for example — STO regulations are not as clear-cut, as governments are still undecided as to how it should be regulated. Thailand’s Securities and Exchange Commission (Thai SEC) concluded that Thai-related STOs launched in an international market break the law.

But in an article by the Bangkok Post, deputy secretary of the Thai SEC, Tipsuda Thavaramara, indicated that the commission still has to decide how STOs will be regulated and that, at the moment, it will be looked at on a case-by-case basis.

“At the moment, we have not decided whether STOs fall under the SEC Act or the Digital Asset Act, but it depends on the STOs conditions and the details in its white paper.”

6. What are the advantages of an STO?

Compared to an ICO, STOs are seen as lower risk because the securities laws that security tokens have to comply with often enforce transparency and accountability. A security token will also be backed by a real-world asset, which makes it a lot easier to assess whether or not the token is priced fairly in relation to the underlying asset. With pure utility tokens, it can be difficult to assess the true value of a token and whether or not it is priced fairly.

Compared to traditional IPOs, an STO is cheaper because of the removal of middlemen, such as banks and brokerages. Smart contracts reduce the reliance on lawyers, while the blockchain reduces the need for paperwork. This makes the whole process not only cheaper, but also faster.

Fractional ownership and the ability to trade 24/7 bring additional liquidity to the market, especially with traditionally illiquid assets, such as scarce paintings, property and collectibles.

“The ability to trade around the clock, with a range of currencies, offers investors both convenience and liquidity.”

These same characteristics open up the market to smaller investors who wouldn’t normally have access to the more avant-garde types of assets.

Finally, it’s good for blockchain adoption in the long-run. STOs are legally compliant, which means they are perceived to be less of a risk and will encourage institutional investors to come on board.

The more institutional investors start to invest, the less volatile the market is likely to become and the further blockchain adoption will grow. 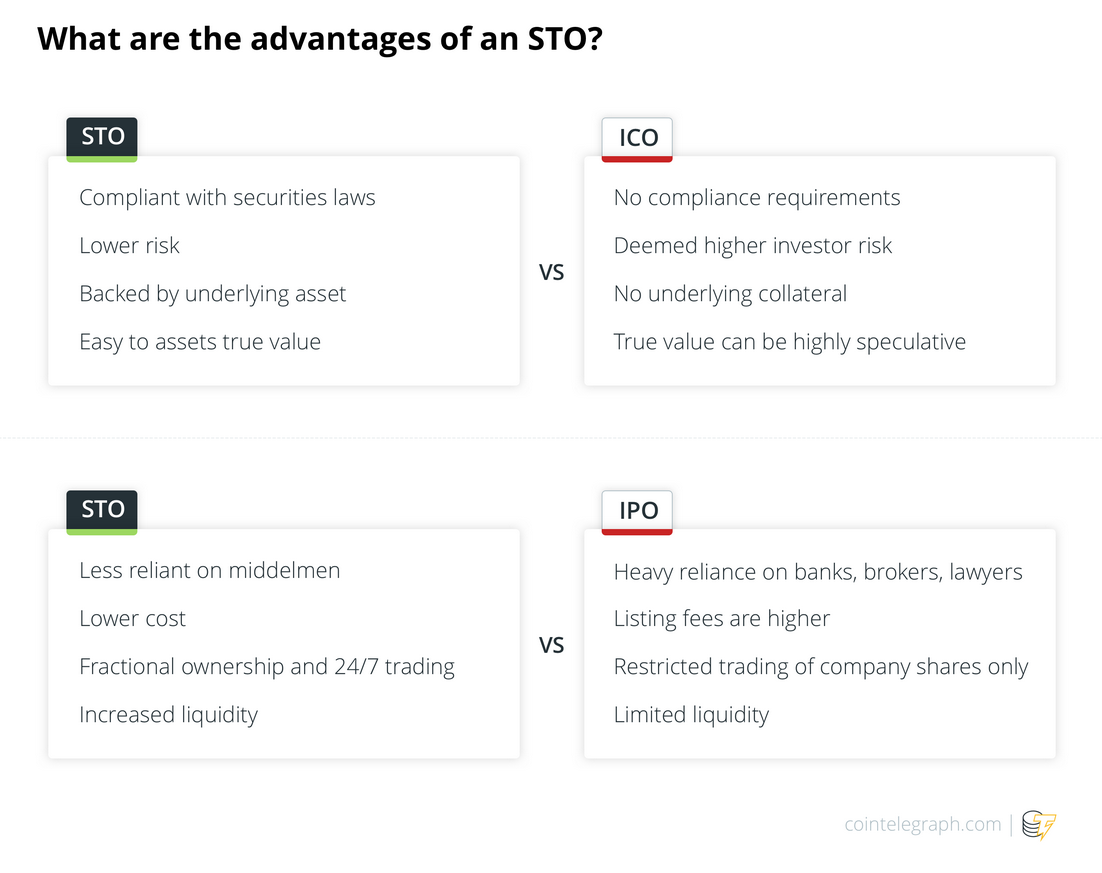 7. What are the main challenges with STOs?

This places a bigger administrative burden on them, as processes will have to be set up for custodianship, tracking ownership, exchange approvals, Know Your Customer (KYC), AML, etc. to make sure they comply with the relevant securities laws. And although the process is seen as cheaper than a traditional IPO, the additional upfront work does make it more costly and raise the barrier of entry compared to utility ICOs.

Furthermore, by removing some of the middlemen like banks, brokerages and lawyers, the responsibility of performing these functions now falls on the shoulders of the company, which further increases the administrative burden.

The regulations in certain jurisdictions might also limit who can invest in the STO, which reduces the overall investor pool.