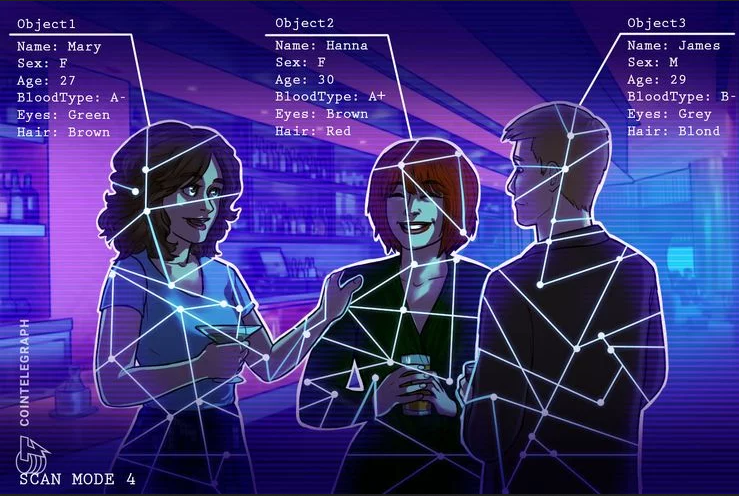 According to the latest estimates, we generate around 2.5 quintillion bytes of data every day. That’s 2.5 followed by 17 zeros — or rather 2.5 trillion million — a number that’s impossible to visualize intuitively, but nonetheless has massive implications for our privacy online, our security and our ability to keep our digital identities within our own personal control. Indeed, recent surveys indicate that as many as 89 percent of consumers believe that corporations currently aren’t doing enough to protect their data, while over half of all CEOs and C-suite executives admit that most consumers are right to doubt them on this.

Given the overwhelming scale of this problem, there’s little chance it will be resolved overnight. However, as Cointelegraph reported in an analysis last year, a growing number of blockchain-based platforms have emerged with the promise of making the data related to digital ID more manageable. Thanks to the emergence of blockchain technology, a new paradigm — self-sovereign identity — is now possible, one which is shaping up to provide individuals with direct control over the nuggets of data and the credentials that prove who they are. Organizations such as the Sovrin Foundation, Bloom and Civic are all vying to realize this paradigm, while an expanding range of private and public institutions are now planning to build blockchain-based systems of their own.

There is, then, plenty of evidence to indicate that the hype of 2017 and 2018 is now bearing fruit when it comes to blockchain and digital identity. However, as encouraging as it is to see the new blockchain-based platforms actually being used, the sheer profusion of these platforms presents problems of its own, insofar as it could make it harder to arrive at the kind of universal system of digital ID the companies featured in this article are working toward, in which digital ID and personal data isn’t siloed.

Blockchain and digital ID platforms have already come a long way since last year. This is evident in the number of notable organizations that have recently involved themselves in the sector. In January, the Iceland-based ID verification platform Authenteq revealed that it had secured $5 million in a Series A funding round led by Draper Associates — which, in the past, had invested in Tesla, Skype and Baidu. That same month, the chief executive of the Canadian Bankers Association (CBA) stated that it was favorably investigating the idea of using a blockchain-based solution as part of the open-banking ID system it was planning to develop.

2018 brought other examples of governmental and commercial interest in blockchain-based ID, including from the European Union, Microsoft, Telefonica and Johnson Controls. For the most part, such interest isn’t merely the result of the novelty of blockchain and the hype surrounding it, but rather of the genuine progress a variety of startups and organizations have made in developing their platforms.

Sovrin Foundation’s chair, Dr. Phillip Windley, explains to Cointelegraph, self-sovereign identity refers to ID credentials that are held and controlled by the person they identify — and in Sovrin’s case, these credentials are collated from multiple sources, meaning that there is no single centralized source for all of them. “Sovrin’s approach to identity is based on multi-source identity where identity attributes are vouched for by many credential issuers,” he says.

“Anyone can become a credential issuer. Identity owners can hold credentials from multiple sources and present them to prove things about themselves. Credential verifiers determine which credentials they will trust. This is how identity works in the physical world. Sovrin brings it online.“

Since launching at the end of 2016, the Sovrin Foundation has expanded and developed quickly. According to Windley, the “Sovrin network now boasts stewards on every continent except Antarctica,” with IBM, Cisco, T-Labs and Swisscom counted among the 60 stewards tasked with running the validator nodes that make the Sovrin ledger work.

“The governments of British Columbia and Ontario have created over 6 million credentials representing business registrations and licenses for businesses in those two provinces,” he explains, while another  example comes from the development of a platform for credit unions by CULedger, which plans to issue a million credentials in the coming year.

Other blockchain-based ID platforms have witnessed tangible growth in the past year: Civic signed partnerships with Telefonica and a number of other companies, while United Kingdom-based Nuggets recently signed a deal with Lateral Payment Solutions to bring decentralized ID to the latter’s payment platform. There’s also the credit-scoring and digital ID platform Bloom, which, according to co-founder Ryan Faber, made significant advances in user growth, because its app is attracting bigger organizations as well as individual users.

“Big corporations are looking toward Bloom as a solution for secure and streamlined lending. Over the last few months, we announced public collaborations with American Express Middle East and BMW Financial Services, among others.”

One other company worth mentioning is Lynked.World, a Netherlands-based firm that’s using the Ethereum blockchain to provide ID verification, as well as professional and educational verification. In December, it produced the first-ever blockchain-based birth certificate to be issued in India, after it secured a partnership with the municipal government of Kolkata. It also has partnerships with a range of state-run companies in the South Asian country, including Coal India Limited, the Metal Scrap Trade Corporation Limited (MTSC) and the West Bengal Forest Corporation Limited, with which it will issue digital ID cards and passbooks in order to mediate between local traders and markets.

Such beginnings are still relatively modest, but establishing working relationships with real organizations is furnishing additional proof that there’s a genuine appetite for blockchain-based ID solutions, which are trustworthier and more secure than pre-existing alternatives.

There is hope that blockchain-based platforms will play an increasingly important role in securing digital ID and personal data in the future. However, since the organizations to which we have to prove our identities are growing so quickly as to stretch into almost every corner of our lives, it’s clear that it’s still going to take a long time before blockchain-based ID systems become widespread. What’s more, added resistance will be provided by all those platforms and companies that profit from the current system, in which people don’t have control over their personal data.

“Big companies manipulate data, so they are not very interested in decentralizing this kind of information,” notes Vlad Dobrynin, the CEO and founder of Humans.net, a blockchain-based social network for people to directly trade skills and help. Dobrynin warns that personal data is a highly profitable market, and one that no company or industry would give up without a fight.

“In fact, there is a huge shadow data industry worth billions of dollars each year that is absolutely dependent on hoovering up personal data and which many large organizations sell their data into. As such, there will be resistance at this level and no doubt many clever arguments will be put forward as to why personal data gathering and data ‘analysis’ should continue. However, it ultimately depends on users and a critical mass of startups that use blockchain-based digital IDs to start turning the tide.”

As Phillip Windley also argues, network effects will prove key in driving adoption, with startups and organization initially having to push very hard for several years before they reach that all-important tipping point where others are forced to join for fear of being left behind.

“Self-sovereign digital identity will grow similar to other platforms with large network effects: slowly at first and then all at once. The production uses […] use credentialing within an ecosystem: Canadian business licensing, credit unions, and healthcare professionals. Those organizations and others are doing the hard work of getting people used to a new model, building partnerships, and launching systems. But once enough of these exist in isolation, the interaction of these people starts to put pressure on others outside those ecosystems to accept these credentials, or organizations outside these ecosystems start to see how accepting these credentials could save them time or money.”

At the moment, there are in fact plenty of blockchain-based ID systems “in isolation,” as Windley puts it. For example, there is Linum Labs’ platform (recently tested by the Swiss Federal Railways), the platform now being developed by startup Attest in partnership with Deloitte, and also the Digital ID system for cross-border payments being built by Visa in collaboration with IBM.

There is, in other words, a large number of platforms offering very similar services, and the worry here is that the relative abundance of competing platforms may actually prevent a universal system of digital ID from emerging. Because if you have to use one blockchain-based platform to prove your identity to company X, and then another for bank Y, and then yet another for governmental agency Z, then you clearly still haven’t escaped a world where identity is “siloed,” as the current situation is described by the Netherlands-based Gemalto (among others).

Still, while this is a potentially serious problem, the organizations working within blockchain-based ID don’t seem too fazed by the large number of startups and established companies piling into the area. Phillip Windley, for one, also thinks the waters will be muddied further by the emergence of ‘blockchain-based’ platforms that aren’t truly decentralized.

“The interest is heartening because it shows that there are real problems here that people are willing to spend money to solve. But it also muddies the waters. Most of these blockchain-based digital ID systems are not self-sovereign or multi-source. Consequently, they are perpetuating the old, single-source identity model that has failed on the internet for the last 20 years. They are not decentralized identity, like a multi-source ID system, but centralized despite using the blockchain. This will cause confusion in the businesses that are necessary to launch the ecosystem.”

The existence of blockchain-based, yet centralized digital ID platforms may potentially cause confusion among organizations and the general public. That said, it’s likely that the advantages of the best decentralized platforms will inevitably make themselves known to the general public, so that eventually a few dominant platforms will emerge, possessing enough reach to provide their users with a single point of entry for proving their identity online, regardless of who they’re dealing with and what they want to prove.

As explains Ryan Faber, who’s nonetheless positive about the coexistence of different platforms:

“Competing identity systems will evolve as a response to market demand, and those that best address the problems of consumers will eventually determine the direction of the ecosystem. [Our] standard is globally accessible and open source, but we do not believe a single standard will rule the world. Identity needs flexibility. We are excited about cross-platform efforts to develop interoperable and extensible identity solutions to bring digital IDs to reality.”

And at the very least, even if decentralized digital ID remains comparatively siloed between a handful of competing platforms, such a situation will still be preferable to the current, non-blockchain-based framework. That’s because, as the kind of use cases and deployments above have been proving, blockchain-based ID offers real advantages of security, transparency and control to users — advantages that an increasing number of people and institutions will be taking up in the coming years.