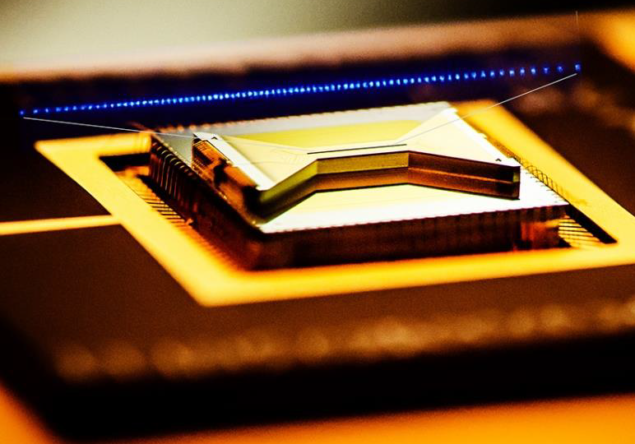 Linear computation: montage of a photo of the chip containing the trapped ions and an image of the ions in a 1D array (Courtesy: Christopher Monroe)

The first commercial quantum computer that uses trapped ions for quantum bits (qubits) has been launched by the US-based start-up IonQ. The device is unlike other commercial systems, which use qubits made from superconducting circuits. The company is now working with a small number of users to improve the technology.

Over the past few years, quantum computing has gone from an enticing promise of vastly superior computing power to real devices that can do increasingly useful calculations. A modest number of commercial quantum computers have already been made by small companies such as Rigetti as well as tech giants such as IBM. What these systems all have in common are qubits made from superconducting circuits.

But now University of Maryland spin-out IonQ is bucking this trend by using trapped-ion technology developed by Maryland physicist Christopher Monroe, who is the company’s cofounder and chief executive.

The IonQ device can host 160 ion qubits. The company has performed simple quantum operations on a string of 79 qubits and full quantum computations on 11 qubits. It was announced on 11 December at the “Quantum for Business” conference in Mountain View, California. The company claims that

“IonQ’s systems are the first in the market that store information on individual atoms. They are more accurate and can perform more complex calculations than any quantum computer built to date.”

“I think the announcement is significant, and shows they are making good progress”, says quantum-information specialist John Preskill at Caltech, who was not involved in the work. He believes that the ion-trap technology is competitive with superconducting qubits.

“Even at this early stage, the results show the ion trap design has all the advantages we expected and more” – Christopher Monroe

Ion-trap computers work by holding the ions in a geometrical array – IonQ uses a simple linear arrangement (see figure above). Laser beams encode and read-out information to and from individual ions by causing transitions between an ion’s electronic states. During a computation, the ions “feel” one another’s state via electrostatic interactions.

The IonQ device uses ytterbium ions, but unlike superconducting qubits, they don’t need to be cooled to within a fraction of a degree of absolute zero. Bulky cryogenic equipment is therefore not needed and the entire system occupies about one cubic metre.

The qubit tally of IonQ’s device exceeds the 50-qubit devices reported by IBM and Google, although Google is said to be preparing a 70-qubit machine. But the power of a quantum computer is not simply a question of how many qubits it has; it’s equally important how well each of them performs.

This is where Monroe and colleagues think ion-trap devices might show an advantage. Ensuring that every qubit is identical, for example, is easier with ions because superconducting circuits are much more complicated to make. What is more, the ions are less error-prone, showing an excellent “gate fidelity” of more than 99%.

Gate fidelity is the probability that the gate produces the quantum state it is supposed to, explains Monroe. “A fidelity of 99% roughly means that you can do about 100 operations before the quantum state becomes gibberish”, he says. This means that IonQ’s quantum computer might be able to handle “deeper”, more complex algorithms with more operations.

Preskill adds “I don’t think the other companies have reported two-qubit gate fidelities this good in their multi-qubit devices”.

The IonQ device reportedly performs well for a standard benchmark test for quantum computing called the Bernstein-Vazirani algorithm. This encodes a number, represented by several bits, into a mathematical function from which the number can be extracted by making a single ‘yes/no’ enquiry on one of the qubits of the encoding function.

The IonQ device has also been used to calculate the binding energies of simple molecules. In principle, quantum computers can do these calculations exactly, rather than needing the approximations that must traditionally be used for any atom or molecule with more than one electron. The IonQ machine was used to do this calculation for a water molecule – a more complicated case than the lithium and beryllium hydrides studied using IBM’s quantum computer.

IonQ’s announcement “came as a pleasant surprise”, says Umesh Vazirani of the University of California at Berkeley, one of the creators of the benchmark algorithm. “They are much further along than I was expecting, and I am impressed with the performance they claim. IonQ’s ion traps are serious contenders with devices that use superconducting qubits.”

Rainer Blatt of the University of Innsbruck in Austria, who conducts experimental work on ion-trap quantum computation, says “the race is still on for which platform is the best, but ions are surely at the front.” Although ion-trap devices often receive less publicity, he says, they “often yield notably better performance.”

But “there is a long road ahead and it is too early to declare winners”, Vazirani warns. “It is also quite possible that it may not end up being an either/or situation”, he says. “The two technologies have different strengths, and eventually a quantum computer might incorporate both for different functions.”

“We have a very long view on the business plan”, says Monroe. “Since it is very unlikely that quantum computers will be able to solve useful problems anytime in the next few years, we are starting to train our system on small problems and algorithms that are of the same form as those that are more difficult.”

The IonQ device is not, unlike the IBM Q quantum computer, yet available to all comers. Monroe explains that they are still a small company, with just 32 employees, and so “we will be partnering with a few users that can help us design and improve our current and future systems.” Ultimately, however, the company aims to make the computer more widely accessible via a cloud server.