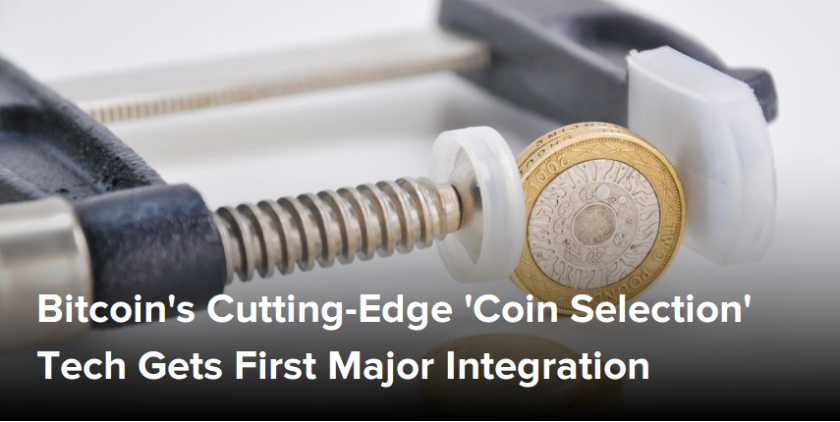 Revealed exclusively to CoinDesk, BitGo is the first mainstream crypto company adopting a spin on “coin selection,” a scaling technology that’s been one of many touted as a way to ease the industry’s obsession with lowering fees since they spiked to over $20 a transaction in December.

Though fees have since fallen to less than $1, the incident had a huge psychological impact. As such, the industry jolted into action, looking into technologies that could help chip away at these fees.

As long-promised, coin selection more efficiently selects what coins go toward a particular transaction, and thus could have a big impact on users the next time fees go up (due to rising prices or increased use of the network). The idea has been around for a couple years but is just now starting to gain more widespread attention.

And with the news today, BitGo is opening up the technology to a large swath of the industry.

Indeed, all BitGo clients who have upgraded to their latest software version will have access to this new tool, seeing fee reductions of up to 30 percent, according to the company.

“What we’re doing here is addressing high-traffic wallets. Some of our clients get lots of lots of deposits into exchanges. And these enterprises need to sweep up these on-chain transactions,” BitGo engineer Mark Ehardt, the main brain behind the technology, told CoinDesk.

“If fees fluctuate again in the future, customers will save a lot on fees.”

While Ehardt couldn’t reveal which of its customers have upgraded to the newest version of its software – and as such, have access to the technology – he said, it’s most of them.

And with some of BitGo’s clients including the likes of Bitstamp, one of the oldest and largest bitcoin exchanges, and blockchain-based identity platform Civic, the technology is likely to reach a significant number of bitcoin enthusiasts.

A tweak on the tech

The proprietary technology Erhardt came up with, which includes coin selection, hasn’t been used anywhere else before.

It’s a bit complicated, but it takes on a very old problem in bitcoin.

Each transaction fee depends on how much data is put into a transaction, rather than its value, as in traditional payment systems. It sounds funny, but the reason it’s this way is that bitcoin’s transaction space is so limited. Charging extra for more data incentivizes users to take up as little space as possible.

Because of this, it’s conceivable a small transaction of $0.10 could cost more in fees than a $1,000 transaction.

So, what causes there to be more data in some transactions than others? This largely depends on the number of so-called “inputs,” which are the pieces of bitcoin that go into a transaction – the more inputs, the more data, the more expensive.

A couple years back for his master’s thesis, Erhardt invented a better algorithm for choosing which coins should go into a transaction (this is coin selection), trying to avoid creating, or unnecessarily using, so-called dust, or tiny amounts of bitcoin. It was such a useful improvement, the largest bitcoin software client, Bitcoin Core, moved to adopt it.

When adding the technology to BitGo’s services, though, Erhardt realized something else.

Spending transactions with a large number of inputs when fees are lower, like today, is not as expensive. And so this is a good time to look through a wallet’s coins and see if it’s possible to “consolidate” the coins – a process you can think of as like trading in a hundred pennies for $1.

“We really would like to partially automate this,” Erhardt thought.

And that prompting him to build something even more complex, the predictive UTXO management product, which reacts to the level of fees at the current time, using a threshold of 10 satoshis per byte. If fees are higher than this number, it uses as few inputs as possible. But, if fees are lower than this number, it automatically decides instead to consolidate the tiny transactions.

As mentioned, Erhardt thinks this algorithm will be particularly useful for high-traffic wallets who are sucking in tons of UTXOs (or unspent transaction outputs).

Erhardt said his company is “operating under the assumption” bitcoin fees will continue to fluctuate over time, which is why the actively reacting algorithm is so necessary.

Yet, Erhardt admits it’s hard to say what will happen in the future.

“Spending patterns are hard to predict and fees can go crazy overnight.”

Even with today’s lower fees, though, Erhardt expect the algorithm to have a big impact. “With small fees, we see huge savings,” he told CoinDesk.

And this will be especially true once the few lagging BitGo clients who haven’t yet transitioned to the new technology finally do.