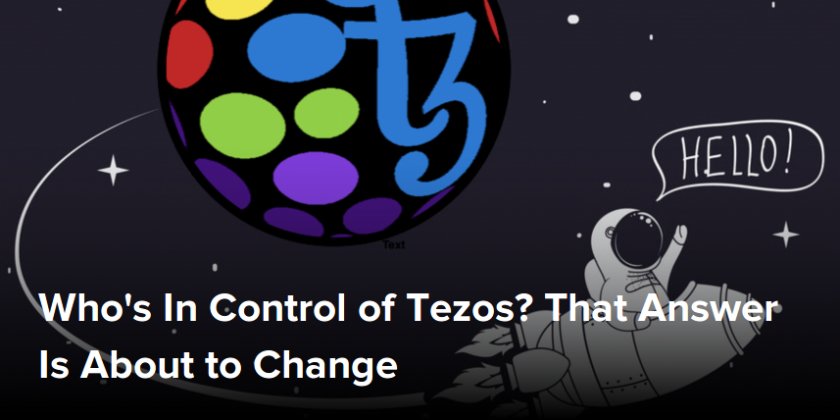 “To me, it kind of feels similar to the beginning of ethereum.”

Andrew Paulicek, founder of Happy Tezos, isn’t the only one excited about the upcoming milestone in the life of Tezos, a blockchain network that launched three weeks ago after a series of long, painful delays.

Every three days or so – the exact intervals vary – Tezos enters a new “cycle.” At some point this weekend, likely Saturday, it will cross the threshold into cycle number seven.

When that happens, the Tezos Foundation, the entity that conducted Tezos’ initial coin offering (ICO) last year and launched the network at the end of June, will give up sole control of the Tezos blockchain. With this change, both the first generation of Tezos startups and its token holders will have roles to play in the network.

Since launch, every one of Tezos’ eight “bakers” – validators who serve a similar function to miners in other blockchains – has been controlled by the foundation, as this page shows.

With the beginning of the next cycle, the opportunity to “bake” will open up to the broader community, and Tezos will begin to assume something closer to the final, decentralized form its founders envisioned.

Like EOS, the Tezos network reaches consensus about the state of the blockchain using delegated proof-of-stake, rather than the proof-of-work system familiar to bitcoin and ethereum. Instead of crunching through hashes to find a new block of transactions, as in mining, the process is a kind of randomized voting system known as validating or, in Tezos’ bread-themed jargon, baking.

Unlike EOS, however, validators are not chosen through elections.

The way Tezos’ system works, only nodes with a “roll” of 10,000 XTZ (“tez”) tokens can bake. Ordinary users who lack the funds can delegate tokens to professional services to do it for them, however. That way, users earn subsidies from the network, minus any fees charged by bakers.

A few of these professional delegates (Happy Tezos is one, though it will not be participating in the first cycle of baking) will be making their debut in the next cycle, though foundation nodes will continue to bake the vast majority of blocks for at least a few weeks. According to a spreadsheet shared with CoinDesk by one of these independent delegation services, the foundation will initially find around 80 percent of blocks, but that proportion will drop off rapidly as more bakers come online.

“That’s just going to continue to ramp up every cycle.”

The excitement is palpable at the delegation services CoinDesk spoke to – in part, no doubt, because they will soon be earning fees from baking.

“This is the moment everybody’s been waiting for,” Bo Byrd, founder of the delegation service Tezzigator, said. His co-founder, Josh Brown, said, “We’re definitely going to be watching when the ball drops.”

It would appear the token holders share the delegation services’ enthusiasm.

“We’re thrilled to see the level of participation in baking,” a Tezos Foundation spokesperson told CoinDesk, adding: “over 96 percent of the tokens activated are taking part in baking or delegation.”

In fairness, there’s not much else to do with tez in the absence of decentralized applications on the platform.

Especially since holders can move their delegated tokens at any time – there is no minimum period for which they must be staked – there would appear to be little risk in delegating tez and earning what amounts to interest from the block subsidies.

Then again, tez holders should choose their delegation services wisely. Every service CoinDesk spoke to, as well as the Tezos Foundation, said the same thing: the relationship between token-holder and baker is not governed by smart contracts, but rather is “off-chain” – at least for the time being.

In other words, clients need to trust that the delegation services they sign up for will pay them what they’re owed, and not charge higher fees than advertised. In contrast to bitcoin mining, Lamis said, as a Tezos baker:

“You have to be a politician and a customer support person and a technologist to be able to pull it off.”

As this nascent market gets underway, one of the biggest challenges will be transparency and access to information. Lamis said that he depended on “tribal knowledge” gleaned from forums and conversations with Tezos developers.

But “as far as digesting all this technical information and making it explainable,” he added, that’s going to be a job for the community over the coming year. It might not be easy, he concluded:

“I think this is a whole new level of geekiness.”