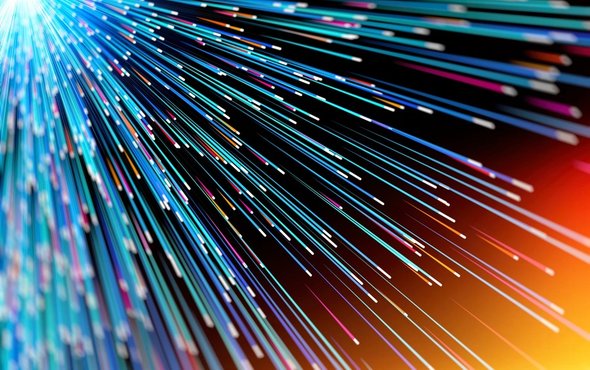 Results from the Micius satellite test quantum entanglement, pointing the way toward hack-proof global communications — and a new space race

In a landmark study, a team of Chinese scientists using an experimental satellite has tested quantum entanglement over unprecedented distances, beaming entangled pairs of photons to three ground stations across China — each separated by more than 1,200 kilometers. The test verifies a mysterious and long-held tenet of quantum theory, and firmly establishes China as the front-runner in a burgeoning “quantum space race” to create a secure, quantum-based global communications network — that is, a potentially unhackable “quantum internet” that would be of immense geopolitical importance. The findings were published Thursday in Science.

The concept of quantum communications is considered the gold standard for security, in part because any compromising surveillance leaves its imprint on the transmission. Conventional encrypted messages require secret keys to decrypt, but those keys are vulnerable to eavesdropping as they are sent out into the ether. In quantum communications, however, these keys can be encoded in various quantum states of entangled photons — such as their polarization — and these states will be unavoidably altered if a message is intercepted by eavesdroppers. Ground-based quantum communications typically send entangled photon pairs via fiber-optic cables or open air. But collisions with ordinary atoms along the way disrupt the photons’ delicate quantum states, limiting transmission distances to a few hundred kilometers. Sophisticated devices called “quantum repeaters” — equipped with “quantum memory” modules — could in principle be daisy-chained together to receive, store and retransmit the quantum keys across longer distances, but this task is so complex and difficult that such systems remain largely theoretical.

“A quantum repeater has to receive photons from two different places, then store them in quantum memory, then interfere them directly with each other” before sending further signals along a network, says Paul Kwiat, a physicist at the University of Illinois in Urbana–Champaign who is unaffiliated with the Chinese team. “But in order to do all that, you have to know you’ve stored them without actually measuring them.” The situation, Kwiat says, is a bit like knowing what you have received in the mail without looking in your mailbox or opening the package inside. “You can shake the package — but that’s difficult to do if what you’re receiving is just photons. You want to make sure you’ve received them but you don’t want to absorb them. In principle it’s possible — no question — but it’s very hard to do.”

To form a globe-girdling secure quantum communications network, then, the only available solution is to beam quantum keys through the vacuum of space then distribute them across tens to hundreds of kilometers using ground-based nodes. Launched into low Earth orbit in 2016 and named after an ancient Chinese philosopher, the 600-kilogram “Micius” satellite is China’s premiere effort to do just that, and is only the first of a fleet the nation plans as part of its $100-million Quantum Experiments at Space Scale (QUESS) program.

Micius carries in its heart an assemblage of crystals and lasers that generates entangled photon pairs then splits and transmits them on separate beams to ground stations in its line-of-sight on Earth. For the latest test, the three receiving stations were located in the cities of Delingha and Ürümqi—both on the Tibetan Plateau—as well as in the city of Lijiang in China’s far southwest. At 1,203 kilometers, the geographical distance between Delingha and Lijiang is the record-setting stretch over which the entangled photon pairs were transmitted.

For now the system remains mostly a proof of concept, because the current reported data transmission rate between Micius and its receiving stations is too low to sustain practical quantum communications. Of the roughly six million entangled pairs that Micius’s crystalline core produced during each second of transmission, only about one pair per second reached the ground-based detectors after the beams weakened as they passed through Earth’s atmosphere and each receiving station’s light-gathering telescopes. Team leader Jian-Wei Pan — a physicist at the University of Science and Technology of China in Hefei who has pushed and planned for the experiment since 2003 — compares the feat with detecting a single photon from a lone match struck by someone standing on the moon. Even so, he says, Micius’s transmission of entangled photon pairs is “a trillion times more efficient than using the best telecommunication fibers. … We have done something that was absolutely impossible without the satellite.” Within the next five years, Pan says, QUESS will launch more practical quantum communications satellites.

Although Pan and his team plan for Micius and its nascent network of sister satellites to eventually distribute quantum keys, their initial demonstration instead aimed to achieve a simpler task: proving Einstein wrong.

Einstein famously derided as “spooky action at a distance” one of the most bizarre elements of quantum theory — the way that measuring one member of an entangled pair of particles seems to instantaneously change the state of its counterpart, even if that counterpart particle is on the other side of the galaxy. This was abhorrent to Einstein, because it suggests information might be transmitted between the particles faster than light, breaking the universal speed limit set by his theory of special relativity. Instead, he and others posited, perhaps the entangled particles somehow shared “hidden variables” that are inaccessible to experiment but would determine the particles’ subsequent behavior when measured. In 1964 the physicist John Bell devised a way to test Einstein’s idea, calculating a limit that physicists could statistically measure for how much hidden variables could possibly correlate with the behavior of entangled particles. If experiments showed this limit to be exceeded, then Einstein’s idea of hidden variables would be incorrect.

Ever since the 1970s “Bell tests” by physicists across ever-larger swaths of spacetime have shown that Einstein was indeed mistaken, and that entangled particles do in fact surpass Bell’s strict limits. The most definitive test arguably occurred in the Netherlands in 2015, when a team at Delft University of Technology closed several potential “loopholes” that had plagued past experiments and offered slim-but-significant opportunities for the influence of hidden variables to slip through. That test, though, involved separating entangled particles by scarcely more than a kilometer. With Micius’s transmission of entangled photons between widely separated ground stations, Pan’s team has now performed a Bell test at distances a thousand times greater. Just as before, their results confirm that Einstein was wrong. The quantum realm remains a spooky place — although no one yet understands why.

“Of course, no one who accepts quantum mechanics could possibly doubt that entanglement can be created over that distance — or over any distance — but it’s still nice to see it made concrete,” says Scott Aaronson, a physicist at The University of Texas at Austin. “Nothing we knew suggested this goal was unachievable. The significance of this news is not that it was unexpected or that it overturns anything previously believed, but simply that it’s a satisfying culmination of years of hard work.”

That work largely began in the 1990s when Pan, leader of the Chinese team, was a graduate student in the lab of the physicist Anton Zeilinger at the University of Innsbruck in Austria. Zeilinger was Pan’s PhD adviser, and they collaborated closely to test and further develop ideas for quantum communication. Pan returned to China to start his own lab in 2001, and Zeilinger started one as well at the Austrian Academy of Sciences in Vienna. For the next seven years they would compete fiercely to break records for transmitting entangled photon pairs across ever-wider gaps, and in ever-more extreme conditions, in ground-based experiments. All the while each man lobbied his respective nation’s space agency to green-light a satellite that could be used to test the technique from space. But Zeilinger’s proposals perished in a bureaucratic swamp at the European Space Agency whereas Pan’s were quickly embraced by the China National Space Administration. Ultimately, Zeilinger chose to collaborate again with his old pupil rather than compete against him; today the Austrian Academy of Sciences is a partner in QUESS, and the project has plans to use Micius to perform an intercontinental quantum key distribution experiment between ground stations in Vienna and Beijing.

“I am happy that the Micius works so well,” Zeilinger says. “But one has to realize that it is a missed opportunity for Europe and others, too.”

For years now, other researchers and institutions have been scrambling to catch up, pushing governments for more funding for further experiments on the ground and in space — and many of them see Micius’s success as the catalytic event they have been waiting for. “This is a major milestone, because if we are ever to have a quantum internet in the future, we will need to send entanglement over these sorts of long distances,” says Thomas Jennewein, a physicist at the University of Waterloo in Canada who was not involved with the study. “This research is groundbreaking for all of us in the community — everyone can point to it and say, ‘see, it does work!’”

Jennewein and his collaborators are pursuing a space-based approach from the ground up, partnering with the Canadian Space Agency to plan a smaller, simpler satellite that could launch as soon as five years from now to act as a “universal receiver” and redistribute entangled photons beamed up from ground stations. At the National University of Singapore, an international collaboration led by the physicist Alexander Ling has already launched cheap shoe box–size CubeSats to create, study and perhaps even transmit photon pairs that are “correlated” — a situation just shy of full entanglement. And in the U.S., Kwiat at the University of Illinois is using NASA funding to develop a device that could someday test quantum communications using “hyperentanglement” (the simultaneous entanglement of photon pairs in multiple ways) onboard the International Space Station.

Perhaps most significantly, a team led by Gerd Leuchs and Christoph Marquardt at the Max Planck Institute for the Science of Light in Germany is developing quantum communications protocols for commercially available laser systems already in space onboard the European Copernicus and SpaceDataHighway satellites. Using one of these systems, the team successfully encoded and sent simple quantum states to ground stations using photons beamed from a satellite in geostationary orbit, some 38,000 kilometers above Earth. This approach, Marquardt explains, does not rely on entanglement and is very different from that of QUESS—but it could, with minimal upgrades, nonetheless be used to distribute quantum keys for secure communications in as little as five years. Their results appear in Optica.

“Our purpose is really to find a shortcut into making things like quantum key distribution with satellites economically viable and employable, pretty fast and soon,” Marquardt says. “[Engineers] invested 20 years of hard work making these systems, so it’s easier to upgrade them than to design everything from scratch. … It is a very good advantage if you can rely on something that is already qualified in space, because space qualification is very complicated. It usually takes five to 10 years just to develop that.”

Marquardt and others suspect, however, that this field could be much further advanced than has been publicly acknowledged, with developments possibly hidden behind veils of official secrecy in the U.S. and elsewhere. It may be that the era of quantum communication is already upon us. “Some colleague of mine made the joke, ‘the silence of the U.S. is very loud,’” Marquardt says. “They had some very good groups concerning free-space satellites and quantum key distribution at Los Alamos [National Laboratory] and other places, and suddenly they stopped publishing. So we always say there are two reasons that they stopped publishing: either it didn’t work, or it worked really well!”