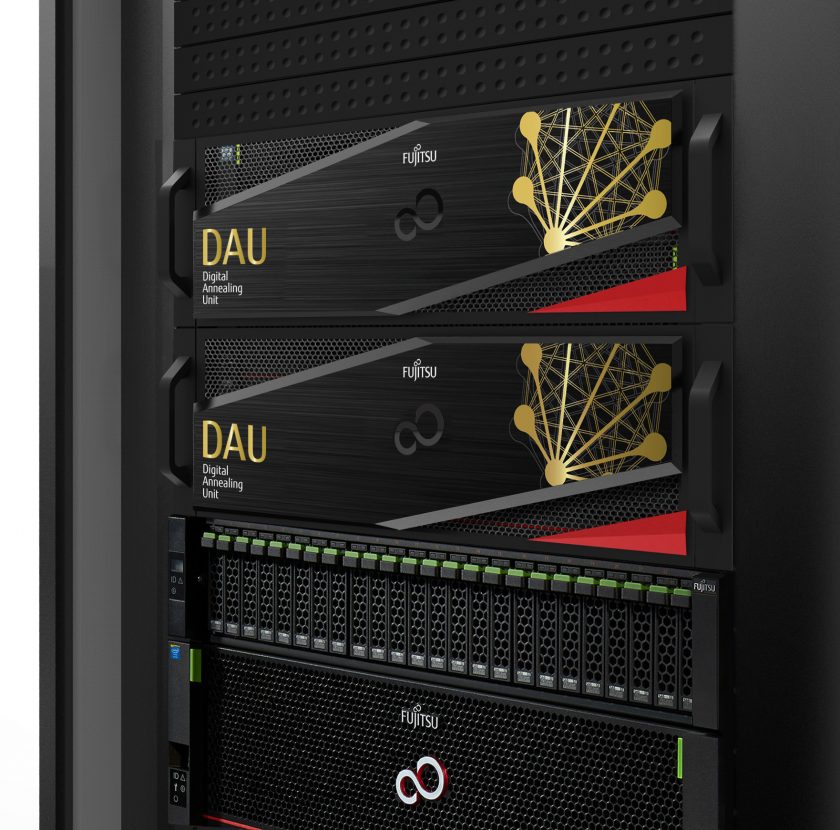 Fujitsu has designed a new computer architecture running on silicon that the company claims rivals that of quantum computers in utility. Dubbed the Digital Annealer, Fujitsu has begun offering cloud services this month employing the technology to resolve combinatorial optimization problems such as finding similarities between patterns of molecules to speed up drug discovery, choosing investments for financial portfolios, and rearranging the layout of components in warehouses and factories to increase productivity.

The announced service comes as activity in the quantum computer field ramps up. D-Wave Systems based in Burnaby, Canada, is marketing its latest generation 2000Q quantum annealer computer and is racing to introduce a 5,000-qubit model within the next two years, according to industry press reports. The D-Wave system is also designed to resolve combinatorial optimization problems similar to those Fujitsu’s Digital Annealer aims to solve.

Meanwhile, a number of companies and research institutes around the world are creating “universal” quantum computers. These use quantum gates to handle quantum bits, or qubits, in complex ways. This enables them to run more sophisticated algorithms than quantum annealing machines and deal with a broader range of applications. However, given their complex designs and requirements for highly controlled superconducting environments, the number of qubits these machines can practically run is relatively small at present, typically up to 50 qubits, compared to D-Wave’s 2,000 qubits.

IBM and Microsoft are taking this quantum gate approach, while Google is working on both quantum gate and quantum annealing systems. In 2016, IBM made its 5-qubit superconducting quantum computer available online for researchers to experiment with. Since then, IBM has also made 16-qubit and now 20-qubit machines available. At CES 2018, Intel unveiled a 49-qubit superconducting quantum test chip called Tangle Lake.

While all these approaches to quantum computing have the potential to deliver unprecedented computing power, the technology requires a lot of overhead and has an expensive price tag. In order to achieve the correct output to problems that are beyond the scope of conventional computers, quantum computers need to maintain near-zero temperatures and remain free from magnetic interference, thermal noise, and mechanical vibration in order for qubits to maintain superposition—the dual states of both 0 and 1—which forms the basis of quantum calculations.

To exploit these drawbacks, Fujitsu, working with the University of Toronto in Canada, has developed its Digital Annealer as an alternative to quantum annealer computing such as the D-Wave machines. Whereas the latter requires a carefully controlled cryogenic environment to function, Fujitsu employs conventional semiconductor technology that operates at room temperature and which can fit on a circuit board small enough to slide into the rack of a data center. 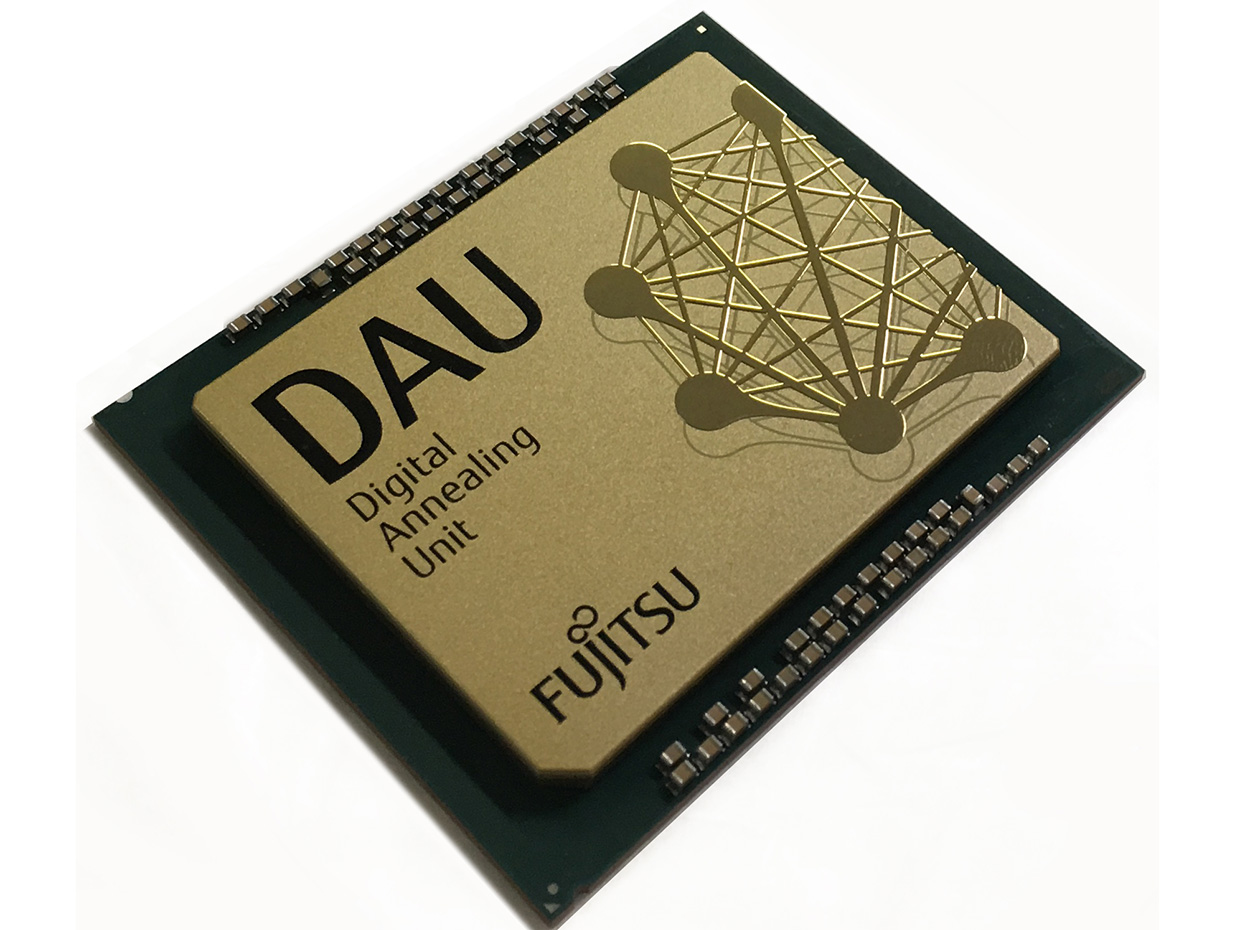 The Digital Annealer is a dedicated chip that uses non-von Neumann architecture to minimize data movement in solving combinatorial optimization problems. It is composed of 1,024 “bit-updating blocks” with on-chip memory that stores weights and biases, logic blocks to perform “bit flips,” and interfacing and control circuitry, explains Hirotaka Tamura, a Fujitsu senior fellow.

Rather than programming the Digital Annealer, a problem is uploaded in the form of weight matrices and bias vectors so as to convert the problem into an “energy landscape.” To this end, Fujitsu has teamed up with 1QB Information Technologies, a leader in quantum computing software based in Vancouver, Canada, to provide both the software for running the system and also a software development kit for customers to write their own energy landscapes.

“Quantum annealers will surpass the Digital Annealer in the long run because of their super-massive quantum parallelism.” —Hidetoshi Nishimori, Tokyo Institute of Technology

To solve a combinatorial optimization problem, “Each bit block uses its one-to-all connections via the 1,023 weights stored in memory,” explains Tamura. The Digital Annealer make full use of this parallelism to assume many possible states based on the weight matrices and bias vectors. Then, the bit blocks collectively run a stochastic search—an estimation technique to minimize the value of a mathematical function—to produce candidates for the next sequence in the process. This continues until the lowest energy state in the energy landscape is realized.

Hidetoshi Nishimori, a professor of physics at the Tokyo Institute of Technology and one of the authors of the first paper proposing the idea of quantum annealing, explains the operation by way of analogy. “In digital annealing, the system hops from one state to another sequentially in search for better solutions, like a person wandering around a complicated landscape filled with hills and valleys, looking for the lowest point.”

This is in contrast, Nishimori adds, to quantum annealing, “where the system looks for the best solution in a massively parallel way with all the states taken into account simultaneously.”

So is the CMOS-based Digital Annealer, with its 1,024 bit blocks capable of matching or outperforming the D-Wave quantum annealing system, with its 2,000 qubits, as Fujitsu is claiming?

“At the moment, most likely it can,” says Nishimori. He notes that the weights between bit blocks on the Fujitsu machine enable a problem to be expressed with a higher degree of precision than the D-Wave system, given it is much harder to control such precision with quantum bits: “So whereas the Digital Annealer has 16-bit precision between bits, the D-Wave machine has only 4-bit precision.” Nevertheless, “quantum annealers will surpass the Digital Annealer in the long run because of their super-massive quantum parallelism,” he adds.

Meanwhile, Fujitsu says it aims to introduce a Digital Annealer with 8,192-bit blocks next year, and followed by a one-million bit-block machine later.

The company started offering its cloud service in Japan on May 15. Pricing will be determined by the problem to be solved. Fujitsu is also working with the University of Toronto to research applications for the Digital Annealer, and later this year Fujitsu will begin marketing Digital Annealer servers, towers, and chips for on-premise installation. The company also plans to roll out cloud services in North America, Europe, and Asia before the end of the year. Fujitsu says it is targeting 100 billion yen (about $900 million) in revenues for the service by 2022.