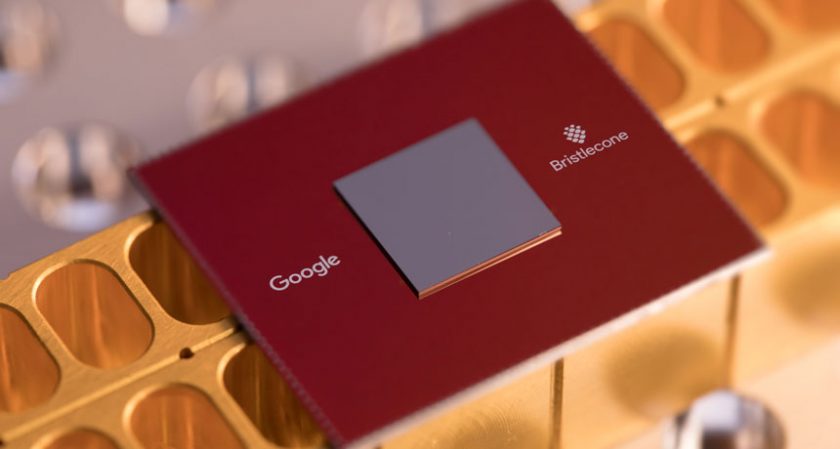 “The demonstration of a quantum processor
outperforming a supercomputer would be a watershed moment.”

Google has lifted the lid on its new quantum processor, Bristlecone. The project could play a key role in making quantum computers “functionally useful.”

Given all the buzz, you might be surprised you don’t have your very own quantum computer yet.

The field of quantum computing – in which a processor handles a range of inputs and outputs at once – has pushed new bounds over the last few years.

We still aren’t there yet. But today, we get a step closer – Google unveiled Bristlecone, its latest quantum processor, and its most powerful to date.

Here’s what you need to know about Bristlecone.

Left: Bristlecone; right: a cartoon of the device: each “X” represents a qubit (Google)

It’s packing a lot of qubits

Qubits, or quantum bits, are the basic units of information in a quantum processor. The more qubits a processor has, the more information it can process at once, and the more powerful it is overall.

IBM recently produced a 50-qubit system. But the Bristlecone trumps it with a whopping 72 qubits.

The various companies pursuing quantum hardware are always keen to brag about how many qubits their latest system possesses, and though that’s not the deciding factor of a quantum processor’s functionality, it’s definitely important.

It needs to make fewer errors

In spite of recent advances, today’s qubits are still unstable, and hardware needs to be sturdy to run them.

Quantum computers need to keep their processors extremely cold and protect them from external shocks. Even accidental sounds can cause the computer to make mistakes.

To operate in even remotely real-world settings, quantum processors need to have an error rate of less than 0.5 percent for every two qubits.

Google’s best has be 0.6 percent using its much smaller 9-qubit hardware. The blog post didn’t state Bristlecone’s error rate, but Google has made it clear that the company strives to improve upon its previous results.

To drop the error rate for its high-qubit processor, engineers need to figure out how software, control electronics, and the processor itself can work alongside one another without causing errors.

Researchers are working so hard to bring us quantum computers because they believe the devices will inevitably outperform classical supercomputers.

The term “quantum supremacy” refers to the prospect of a quantum computer solving a problem that a classical system cannot. Some researchers suspect this could happen when quantum computers reach 100 qubits.

When it does happen, quantum supremacy will be a “watershed moment” for the field, according to Google’s blog post on Bristlecone.

Bristlecone doesn’t quite get us there. But the Google team is “cautiously optimistic” that the new processor could hasten the process.

And the result will mean quantum computers could then become “functionally useful,” The Next Web writes.

Researchers from Google are testing a quantum computer with 72 quantum bits, or qubits, scientists reported March 5 at a meeting of the American Physical Society — a big step up from the company’s previous nine-qubit chip.

The team hopes to use the larger quantum chip to demonstrate quantum supremacy for the first time, performing a calculation that is impossible with traditional computers (SN: 7/8/17, p. 28), Google physicist Julian Kelly reported.

Achieving quantum supremacy requires a computer of more than 50 qubits, but scientists are still struggling to control so many finicky quantum entities at once. Unlike standard bits that take on a value of 0 or 1, a qubit can be 0, 1 or a mashup of the two, thanks to a quantum quirk known as superposition.

Nicknamed Bristlecone because its qubits are arranged in a pattern resembling a pinecone’s scales, the computer is now being put through its paces. “We’re just starting testing,” says physicist John Martinis of Google and the University of California, Santa Barbara. “From what we know so far, we’re very optimistic.” The quantum supremacy demonstration could come within a few months if everything works well, Martinis says.

Google is one of several companies working to make quantum computers a reality. IBM announced it was testing a 50-qubit quantum computer in November 2017 (SN Online: 11/10/17), and Intel announced a 49-qubit test chip in January.

Google’s Quantum AI Lab has shown off a new 72-qubit quantum processor called ‘Bristlecone’, which it says could soon achieve ‘quantum supremacy’ by outperforming a classical supercomputer on some problems.

Quantum supremacy is a key milestone on the journey towards quantum computing. The idea is that if a quantum processor can be operated with low enough error rates, it could outperform a classical supercomputer on a well-defined computer science problem.

Quantum computers are an area of huge interest because, if they can be built at a large enough scale, they could rapidly solve problems that cannot be handled by traditional computers. That’s why the biggest names in tech are racing ahead with quantum computing projects: in January Intel announced its own 49-qubit quantum chip, for example.

“We are cautiously optimistic that quantum supremacy can be achieved with Bristlecone,” said Julian Kelly, a research scientist at the Quantum AI Lab.

“We believe the experimental demonstration of a quantum processor outperforming a supercomputer would be a watershed moment for our field, and remains one of our key objectives,” Kelly said — although he did not offer a timescale for this achievement.

If a quantum processor is to run algorithms beyond the scope of classical simulations, a large number of qubits are required, along with low error rates on readout and logical operations, such as single and two-qubit gates.

Although researchers have yet to achieve quantum supremacy, Google thinks it can be demonstrated with 49 qubits, a circuit depth exceeding 40, and a two-qubit error below 0.5 percent.

Google said its new 72-qubit Bristlecone device uses the same scheme for coupling, control, and readout as its previous 9-qubit linear array. With the new processor, researchers are looking to achieve similar performance to the best error rates of the 9-qubit device, but now across all 72 qubits of Bristlecone. The 9-qubit device demonstrated low error rates for readout (one percent), single-qubit gates (0.1 percent) and most importantly two-qubit gates (0.6 percent) as its best result.

“We believe Bristlecone would then be a compelling proof-of-principle for building larger scale quantum computers,” Kelly said.

However he added: “Operating a device such as Bristlecone at low system error requires harmony between a full stack of technology ranging from software and control electronics to the processor itself. Getting this right requires careful systems engineering over several iterations.”