Simple: because they all are not Blockchains, just use the label …
(only the PoW is “real” Blockchain – the rest are cheap copies with compromises)

At the beach, they say, all your troubles melt away.

But that’s not entirely the case for researchers who spent part of this week at the Financial Crypto 2018 conference on the Caribbean island of Curacao, discussing the decentralization of the two largest crypto protocols, bitcoin and ethereum – or where they’re lacking in this regard.

Presented on March 2, a new paper, titled “Egalitarian Society or Benevolent Dictatorship: The State of Cryptocurrency Governance” by University College London researchers, delved into the topic further by measuring how many developers are contributing to and commenting on cryptocurrency codebases.

For one, the researchers looked at “commits” – bundles of changes a developer proposes to make to the codebase. According to the paper, 7 percent of all the files in the Bitcoin Core software were written by one developer, while about 20 percent to ethereum were written by a single coder.

As such, this signals that ethereum is “a little” more centralized than bitcoin is in this regard, said Sarah Azouvi, a UCL computer science PhD student and co-author of the paper.

It’s an interesting take as it relates to the fierce debates happening within the ethereum community right now, as two sides go head-to-head on an ethereum improvement proposal (EIP) 867.

EIP 867 looks to establish an easier process for recovering lost funds via software changes – a controversial topic that stems back to The DAO hack in 2016, when ethereum developers decided to reverse transactions in order to give victims their funds back.

Yet, even though many similar discussions regularly take place on GitHub, the overall pool of users involved was more limited than Azouvi, and many others, expected.

“It’s still not a lot of people. Most of them are making just a couple comments here and there. A few people are doing most of the discussion.”

But ethereum’s debate over lost funds wasn’t the only reason for attendees in Curacao to discuss the network. Another reason highlighted by the paper was governance, as most of the major code changes are still written by ethereum creator Vitalik Buterin himself.

“He stands out from the rest,” said Azouvi. 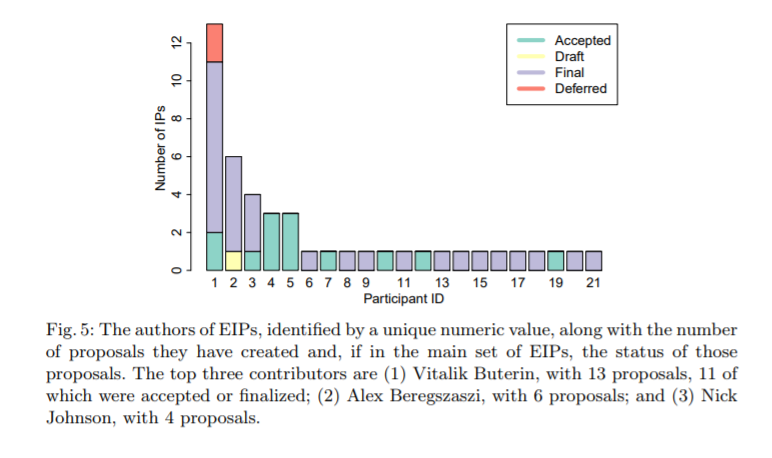 The findings aren’t exactly surprising, as this has been a point of contention for some time, whereby many believe Buterin has too much power over the network for it to truly be called a decentralized blockchain.

Even developer Jason Teutsch, who created ethereum scaling protocol TrueBit, joked that Buterin can be counted on to take care of everything when asked about governance. Although, on a more serious note, he argued the recent debates just showcase how hard governance can be in general, saying there’s often no way to make everyone happy.

“It’s a hard problem. It happens in every governance system. Every time something changes, someone is unhappy.”

Yet, even though governance seems more centralized than people might expect from projects that cherish decentralization, the UCL researchers note this isn’t so unusual.

For instance, ethereum and bitcoin development have similar levels of participation as other open-source projects, such as programming languages Clojure and Rust.

“It’s not that different, though, even though the community is focused on decentralization. They all behave quite similarly,” she said.

Plus, the paper concedes that “measuring levels of centralization by looking at the code or by looking at specific sources” is inherently limited.

Along these lines, researchers from IC3 argued during the conference that there are also technical ways to measure how decentralized a cryptocurrency project is.

In particular, they looked at how long it takes blocks to propagate across the network how and geographically distributed nodes are, determining that ethereum outperforms bitcoin on both these fronts.

And one audience member added yet another angle, noting that decentralization of the cryptocurrency’s economy is also an important factor that was being missed in the research presented at the conference.

The right to vote

But with interest in the decentralization of cryptocurrency networks on the rise, one might think solutions were also being considered.

Yet, researchers and developers at the conference were largely neutral on issues facing ethereum and bitcoin, saying they wanted to steer clear of the politics surrounding the decision-making on the protocols.

“I don’t want to take a political position. I’m interested in technical solutions, but I’m not going to take sides,” Teutsch said about ethereum’s recent debates in particular, then pointing to better voting mechanisms as a possible way to deal with contentious debates.

Azouvi seemed to shy away from taking a position also, saying, “We don’t propose a new system. We count how many people are doing what.”

Although, she continued, echoing what Teutsch said: “[Ethereum] could benefit from having a more formal governance model. It’s difficult because even if you want to have a more formal way of decision-making, it’s hard to decide who writes it. Then there’s the question of who gets to vote.”

“They could try to make sure everyone who’s able to is able to have their vote,” she suggested.

Still, Azouvi noted voting opens up a whole new can of worms:

“Voting itself is a hard problem. It’s non-trivial.”