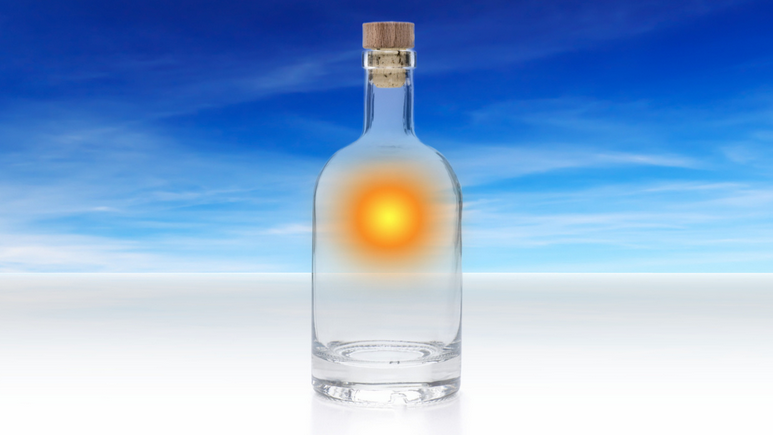 In the last year, a team from Chalmers University of Technology, Sweden, essentially figured out how to bottle solar energy. They developed a liquid fuel containing the compound norbornadiene that—when struck by sunlight—rearranges its carbon, hydrogen, and nitrogen atoms into an energy-storing isomer, quadricyclane. Quadricyclane holds onto the energy, estimated to be up to 250 watt-hours of energy per kilogram, even after it cools and for an extended period of time. For use, it’s passed through a cobalt-based catalyst, at which point the energy is released as heat. The team’s research could be a breakthrough in making solar energy transportable and thus even more usable for meeting real-world energy needs.

What’s more, the team has been adjusting the molecular makeup of their fuel so that it doesn’t break down as a result of storage and release cycles. It can be used over and over again. “We’ve run it though 125 cycles without any significant degradation,” according to researcher Kasper Moth-Poulsen.

As a result, the scientists envision a round-trip energy system they call MOST, which stands for Molecular Solar Thermal Energy Storage.

In the MOST system, the liquid runs through a concave solar thermal collector that has a pipe running across its center. The collector focuses sunlight on that pipe, and the fuel running through it, causing the transformation of norbornadiene into quadricyclane. The charged fuel then flows through transparent tubing into storage tanks, or it can be diverted and shipped elsewhere for use. Says Moth-Poulsen in the Chalmers press release, “The energy in this isomer can now be stored for up to 18 years. And when we come to extract the energy and use it, we get a warmth increase which is greater than we dared hope for.”

To release the fuel’s energy, it’s passed through the catalyst in which a chemical reaction occurs to convert the fuel back into liquid whose temperature has been boosted by 63°C or 145°F. So, for example, if the fuel goes into the catalyst at 20°C, it comes out at 83°C. In this form, the fluid can be used for heating a home or business, or be used in any other system reliant on heated liquid. “You could use that thermal energy for your water heater, your dishwasher or your clothes dryer,” MIT’s Jeffrey Grossman tells NBC MACH. “There could be lots of industrial applications as well.”

This last year has been a key time

Kasper Moth-Poulsen holds the tube containing the MOST catalyst

The first iteration of the Chalmers fuel was revealed about a year ago, and in the intervening months, the researchers have been working toward the robust behavior they’re now seeing, even beyond achieving that remarkable 18-year storage potential. “We have made many crucial advances recently, and today we have an emissions-free energy system which works all year around,” says Moth-Poulsen.

Though other researchers have experimented with similar uses for norbornadiene, their fuels broke down after just a few cycles before their research was abandoned. Those earlier fuels also didn’t hold the energy very long.

The Chalmers team also originally had to mix their isomer with flammable toluene. Now, however, they’ve worked out a way to use the isomer without dangerous additives.

As the world moves to renewable energy, solar energy has proven to be among the most attractive: Sunlight is free and releasing its energy produces no pollution or harmful effects. One remaining limiting factor has been finding ways of storing solar energy that are as clean as solar energy itself. Much work is being down with batteries, but it’s difficult to produce power cells without using toxic materials. The MOST system offers an exciting new angle to pursue.